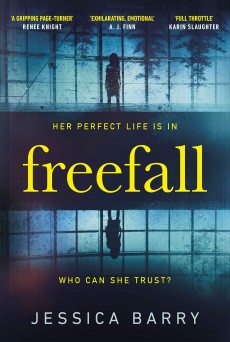 Allison is missing, presumed dead. And she needs to keep that belief going if she is to stay alive.

Allison is alone on a mountain, injured but alive after the small plane crashed. The pilot is dead, but she knows they will come looking for her. She gathers any useful items from the wreckage before the plane explodes, then staggers away as fast as her broken body will take her. And Allison realises too late to go back and search that she has lost the precious necklace her father had given her. She only has memories of his snippets of advice to help her survive in the hostile countryside.
Maggie is alone, thousands of miles away in Owl’s Creek, Maine, until Jim, friend and local police officer, arrives at the door. This cannot be happening. It is barely two years since her husband died. Now Jim is telling Maggie that her only child is dead after a plane crash – a private plane, whose pilot was the CEO of a pharmaceutical company.
As evidence trickles in, Maggie learns that the daughter she has not seen since her husband’s funeral was engaged to the pilot. Though Maggie knows Allison must be dead, she can’t accept it. At least, not until they recover her body as well as the locket, and she finds out more about her estranged daughter’s life.
Jessica Barry has nailed it. A thriller that thrills. Breathless tension that is unrelenting. Believable characters who are likeable but flawed. A heady blend of action and introspection. Simple but evocative writing. Intense emotions and a heartrending mother-daughter relationship. I intended reading a few chapters. I finished the book in one sitting, housework ignored, emails unanswered, tea cold in the mug.
The plot is familiar in many aspects. A person on the run after an accident. A rich and powerful fiancé who is not what he seems. A mother who cannot believe her child is dead. But Barry has weaved these elements together to create a unique, addictive story that will develop easily into the promised film. The author successfully throws the reader right next to the main characters, using the first person for both; Allison in the present tense and Maggie in the past.
The choice of syntax and word usage fits perfectly with each character and scene, starting with extremely short sentences when Allison finds herself alive but in danger. It helps create atmosphere, ramping up the tension, disbelief and despair.
That is not to say the story is without flaws. A mother who is probably in her fifties is made to sound as if she is an octogenarian (hello, most of us mothers of adult children know how to use a computer!) There’s a murder that seems to have no consequences, even though the body is left in a hotel room and bound to be noticed. At least one twist is obvious from the start. Flashbacks are chronologically convenient (from Allison’s point of view). I also felt that the author had taken the fiancé’s story down one route then changed it midway, leaving him less believable and underdeveloped.
Although this is a debut thriller from Barry, readers should note this is a pseudonym, and this author has three other books under her belt. That said, changing genres is often risky, but this one has paid off.