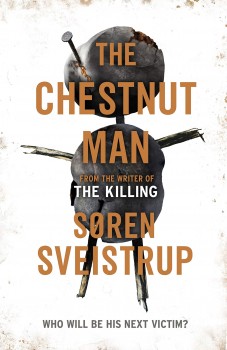 Ambitious headstrong detective Naia Thulin is paired with Mark Hess, a burned-out disillusioned investigator, kicked out of Europol’s headquarters in The Hague and sent to Copenhagen. They are assigned to deal with the horrific case of a young mother who has been killed and dumped at a suburban playground. One of her hands has been cut off, and above her, a small doll made of chestnuts completes the macabre scene.
Thulin and Hess soon discover another disturbing piece of evidence. The chestnut man case has clear fingerprints of a missing girl Kristine, daughter of Rosa Hartung, the Minister for Social Affairs. Kristine vanished a year ago, and thorough investigation culminated in sentencing a man who had confessed to killing her.
However, her body has never been found, and her parents are mentally preparing to declare her officially dead. Rosa is back in the government, her husband Steen drinks too much and their young son is struggling. Hence news of a potential connection to the new murder throws them back into painful turmoil. Soon afterwards a second victim is found murdered, with both hands cut off, and another memento of a chestnut man indicates that the same killer is responsible for this.
As usual the investigation follows various paths and the conflict between the pair and the established team starts to flare, especially as the case of the missing Kristine has been closed, and nobody apart from Hess wants it reopened. Against all odds and different methods of working, Thulin and Hess dig into all possibilities and realise the existence of a common strand between the dead women as anonymous complaints were made against them, with accusations of neglecting and abusing their children.
Søren Sveistrup’s debut novel, translated by Caroline Waight, weaves a very complicated web of connections, past mistakes and future consequences, bringing together well-drawn characters and a convincing storyline. Different perspectives add depth to the plot which otherwise would have just been depressing for the main protagonists as the search for the killer and the motives appear exhaustingly fruitless.
But fear not, Sveistrup is a master of changing direction, adding little bits of interest into the story, and creating distinctive complex portraits of everyone who’s got a role in the story, even if only a small one. Of course that well-honed skill comes from his vast experience as a screenwriter for The Killing (Forbrydelsen), a TV series that took Danish viewers by storm, swiftly followed by well-deserved recognition, awards and international adulation.
Not everyone will be able to stomach the graphic descriptions of mutilations and torture invented by the twisted mind of a high-functioning serial killer who wants to take on the society. Also the sick revenge exacted on women only doesn’t seem fair as it mostly spares men who also might have been guilty of abuse. When the killer targets men it’s only to confuse the police and keep them guessing.
Criticism of the Danish social welfare state aside, The Chestnut Man is huge on the visual atmospheric set-up, chilling twists, drama, tension and the classic Scandinavian flavour.