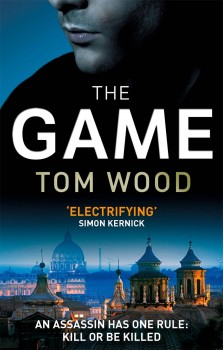 A killer for hire completes an assignment in Algiers to execute another assassin, then is coerced into posing as the dead man to identify his victim’s latest client. Events spiral out of his control and he must choose between doing the right thing and losing his own life.

If you haven’t come across Victor before, the titles of his two previous adventures The Hunter and The Enemy should tell you almost everything you need to know. The faceless ‘hero’ is that almost mythical creature beloved of thriller writers and film producers – the freelance killer for hire. But Victor is no normal assassin. He’s the ultimate in justice for some very deserving unpleasant characters, the Judge Dread of the seriously unrighteous.

He is almost unbearably analytical, completely ruthless and almost inscrutable. Emotion is never allowed to cloud judgement. He has no back story, no future. Even his current clients have a terminate order out on him. The moral rights and wrongs of his business do not concern him. He’ll kill with whatever weapon is available, or his hands. His creed is the six Ps of the SAS – perfect preparation prevents piss poor performance.

Yet Wood makes this almost robotic character strangely endearing. He’s obviously educated, with cultured tastes, speaks many languages – Victor may be the only non-Icelander to understand at least some of that strange tongue – and occasionally a gentleman at heart if that’s not too much of a contradiction.

Action adventures of this genre must be the hardest books to write – stretching imagination as far as it will go both in plot and delivery and yet avoiding toppling over into sheer silliness. Dumas, Haggard and Buchan set the bar, Fleming raised it with the early Bond books, Ludlum’s Jason Bourne also had it at the start. Part of the trick is technical authenticity and Wood’s knowledge of weaponry and surveillance techniques and their counters would do credit to any intelligence service.

The test of it all is the pace, which must be frenetic, the characterisation and the action itself, which must never become clumsy. Wood deploys a basic – and hugely successful technique – unmistakably flagging up the real ‘baddies’ and never letting the reader forget whose side they are on. The fast-moving plot has plenty of twists and turns, betrayals and double crosses.

Victor completes an assignment to execute another assassin, is coerced into posing as the dead man to identify his victim’s latest client and possible connections to the sale of nuclear products, but when events spiral out of control must choose between doing the right thing and his own life.

To reveal more, particularly details of a hair-raising climax, would be to destroy the reader’s enjoyment, but like the rest of this first-class piece of action work, it’s ingenious and delivered with all the subtlety of a kick in the teeth. The Game is a well-plotted, well-written, brutal, bloody, but hugely enjoyable addition to a long tradition of action thrillers, the ideal book to take on holiday with you.