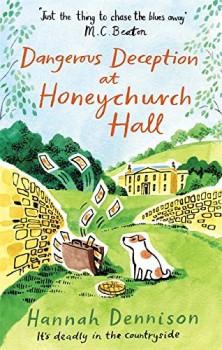 Former TV antiques show presenter Kat Stanford now has her own thriving business in the peaceful Devon countryside. But things start to go wrong with the arrival of a beautiful ex-girlfriend of her beau Piers Carew, heir to the earl of Chawley.

If US-based Hannah Dennison’s mystery writing students on the UCLA Extension Writers’ programme are misguided enough to think this is the way England works, I shudder for the future of the much-beloved cosy genre of crime writing.

This fifth of her Honeychurch Hall Mysteries yanks, if you’ll pardon the bad pun, the traditional West Country cosy into the 21st century with all the grace, charm and subtlety of the manic comedian Michael McIntyre introducing his dreadful TV show.

It is that missing charm and grace that detracts from what is otherwise a cleverly plotted and twisty story set in one of the most beautiful areas of the country. South Hams, which stretches from Totnes to Exeter, is home to the towns of Dartmouth, Kingsbridge, Salcombe and Ivybridge, and also part of the Dartmoor. The very nature of the area, rough moorland leading into fertile farms stretching down to creeks and cliffs, dotted with small villages, means little has changed in years. It is still unspoilt, except in high summer when hordes of ‘yachties’ descend, block inland roads and fill the hundreds of holiday homes which otherwise stand empty.

In her attempt to make the area ‘relevant’ for modern, presumably American, readers, Dennison introduces many of the problems of 21st century life – fly-tipping, WiFi access, ecological activism and even con artists and the cult of popularity. To make the story rather more down and dirty, Tena pads make an appearance and there is plenty of product placement scattered throughout.

Into this background she injects Kat Stanford, former TV antiques show presenter, who has now quit to set up her own thriving business. Kat has also acquired a new country beau in the handsome, but inconsistent, shape of Piers Carew, Viscount Chawley, whose family owns the estate next to Honeychurch Hall – and also an admirer in widower and local police inspector Shawn Cropper.

She and her own widowed mother rent cottages from Rupert, 15th earl of Grenville and his mother, the redoubtable Lady Edith. Rupert is the son-in-law of Aubrey Carew, Piers father, the 12th earl of Denbeigh, a local magistrate noted for his fierce sentencing and uncompromising attitudes.

Kat has organised a Bear Fayre, partly to promote her own business, but things start to go wrong when first she becomes involved with a conman pretending to be an injured Falklands veteran, then the impossibly beautiful Cassandra Bowden-Forbes, star of a reality TV series featuring antiques, and Pier’s childhood friend and former girlfriend, unexpectedly showing up.

First Kat finds herself accused of fly-tipping, then attempting to rip off the ex-soldier. When she finds herself in close proximity to two mysterious deaths, she realises that someone may be out to get her and unless she solves the riddle of the fatalities, she could be the next.

This classic English village mystery with its thoroughly modern touches lifts the lid on today’s grand country estate in all its tarnished, inbred glory. Like its predecessors in the grand tradition of Downton Abbey or Evelyn Waugh’s Brideshead Revisited, it explores nostalgia for the age of English aristocracy and the problems, scheming and lies of all its characters both upstairs and downstairs.

The clever and well-written story should appeal to cosy fans – unless, like me, they can do without their cosies reflecting so much that is wrong with modern life, let alone waving Tena pads at them!