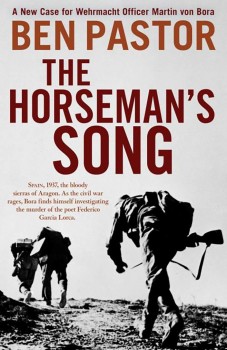 Young German volunteer lieutenant Martin Bora is in a relatively quiet area of the Spanish civil war front when he finds the body of national poet Garcia Lorca.

This is the sixth book featuring Martin Bora, a series that wanders in time, so we have already seen him damaged but still alive towards the end of World War II after service in various theatres. Here he is still very conscious of his youth and inexperience as a volunteer for the nationalists in 1937, during the Spanish civil war.

He is posted to Terual in Aragon, North-West of the country. The active fronts are elsewhere and for the moment things are quiet; Bora has been posted to a small group in the foothills of the sierra. On the opposite side of a precipitous valley is his enemy: an equivalent band of communists/anarchists. Both sides have their opponents under observation while waiting for the war to come their way.

Descending to the stream in the valley one morning for a bath, Bora finds a body which turns out to be that of Garcia Lorca, the renowned national poet. Lorca had republican sympathies and was rumoured to have been killed. The circumstances of his death are unclear. Both sides might be expected to seek propaganda points from his demise, and Bora is charged by Cziffra, the Abwehr officer for whom he is covertly working, to investigate the death.

The book proceeds by way of brief reports from Bora and from his Republican counterpart Philip Walton, an American. Walton comes across Lorca before Bora has secured removal of the body and he too is curious about how it came to be there. It takes the combined efforts of Bora and Walton to unearth the truth.

The two protagonists share a great deal: foreigners in Spain, fighting with men with whom they have little in common, and tested by the difficult terrain and the heat. They also end up sharing the same woman, Remedios, a bruja or witch who lives on the mountain, although this brings their differences to a head. As with other books in the series, much of the writing is internal dialogue. Walton is an interesting character; a driven man who has a secret at his core which much of his life is spent concealing.

Bora is the man we have come to know from previous outings, an aristocrat who has inherited artistic and military skills, multi-lingual, with a Catholic background and a strict belief in duty and responsibility. Like him or hate him, his perseverance in the face of danger and official disapproval is always impressive; you know that Bora will never give up the chase.

In comparison with some of Bora’s other outings, external events are perhaps less interesting, and the details of Lorca’s demise tend to pall (Lorca was a real character and apparently died at Nationalist hands before the date of action in the book). But Bora is as fascinating as ever, and the confrontation with Walton makes for an interesting character assessment.