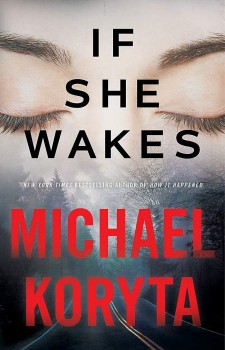 Tara Beckley is lying in a hospital bed, locked inside her own mind. Her sister is fighting for her, but someone else wants her dead, and Tara knows it.

When Tara Beckley is asked to help look after a visiting speaker at a high-profile conference at her college, she’s not expecting it to be a difficult assignment, but things don’t go according to plan. Engineering Professor Amandi Oltamu quickly wants to go off-piste, asking Tara to take a detour en route to the conference, even though she tells him she won’t be popular if he ends up being late. Oltamu waves her concerns away and then makes a strange request. He wants to take a photo of Tara and asks whether she has a nickname. Tara is puzzled but humours him.

Very soon after, Tara and the professor are victims in a brutal attempt on their lives that leaves Oltamu dead and Tara – as far as the medical staff know – in a vegetative state. It’s clear from the start that this was no accident, but only the reader knows this. It’s a while before this becomes clear to anyone else, and even then it takes insurance investigator Abby Kaplan to work out that there’s a lot about the scene that makes it look like it was anything but a simple accident. Abby’s former career was that of a successful stunt driver, and she brings all her knowledge and expertise to bear on figuring out what really happened.

When Tara Beckley starts to realise that she’s in hospital, she very soon realises that although she tries to move and commune, her body is no longer obeying her mind. She’s a prisoner in her own head, locked in and unable to escape. The only person determined not to give up on her is her sister Shannon, who is prepared to challenge the doctors every step of the way, refusing to accept that her sister has gone beyond the point of recall.

Tara’s mum latches onto any possible hope, and provides frequent social media updates on Tara, not realising that there might be someone out there who isn’t prepared to take the risk of Tara waking up again.

Michael Koryta is a past master of combining suspense and thriller writing into a seamless whole and If She Wakes is up there with the best. The book takes a deeply terrifying condition, Locked-In Syndrome, and exploits it for all it’s worth through Tara’s eyes. It’s hard to remain emotionally detached when you’re inside someone’s head in these circumstances, even with the story told in a third person narrative, but in the scenes from Tara’s point of view, there’s no distance involved. You’re right there with her, struggling to move, fighting to be understood, feeling her terror and her despair, imagining what it would be like to be in her condition. And the fear ramps up another notch when Tara realises that her life is still in danger.

Abby Kaplan is another strong female protagonist. She still running from her own demons – a crash that left her popular film star boyfriend dead, but she doesn’t run when it counts, even when she’s pitted against a ruthless teenage killer determined to live up to and even surpass the work of his father, also a professional killer. A teenage hitman is a good twist on an old trope and Dax Blackwell is as chilling an antagonist as I’ve ever come across. He’s relentless, and utterly ruthless, but with just enough flashes of humanity to make him even more terrifying.

Koryta can always be relied on to serve up a tense, excellent thriller, and If She Wakes is a brilliantly terrifying addition to a long stable of winners. I particularly liked the fact that despite her condition, Tara was still thinking, still fighting and still winning. There are no female victims here, just strong, competent women, and that’s another win, so far as I’m concerned.