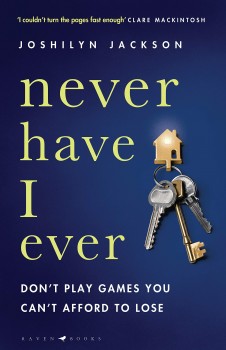 Never Have I Ever

Amy has the perfect family and a quiet life. But her new neighbour’s nasty little game might just destroy that.

Amy Whey lives in a sleepy seaside Florida town with her husband Davis, 15-year-old stepdaughter Maddy, and new baby, Oliver. Hers is a quiet book club and cookies life with a bit of deep-sea diving thrown in for good measure. Until Angelica Roux moves into town with a vicious agenda, and clearly wants to expose a secret Amy has been hiding.
It’s all too easy for Roux when she invites herself to the book club meeting at Amy’s house; her vaguely school-playground-esque dominance of the naïve women through her loose tongue and looser attitude towards the host’s alcohol has them playing a dangerous version of the game, Never Have I Ever.
She enthrals and disgusts Amy in equal measures, teasing her into a game of cat and mouse. But this is no friendly neighbourhood pastime, and no-one is safe from Roux’s depravity. This could just end in murder.
This is my first outing with Joshilyn Jackson, and she has grabbed my interest. This fast-paced domestic thriller story has it all: love, marriage, family, motherhood, forgiveness, friendship. Underneath the sugar coating it is awash with secrets, eating disorders, stalking, tragedy, betrayal, and the evil an older woman can do.
Amy, the protagonist, is smart and likeable although at times an unreliable narrator. Her tragic past tortures her, and little by little the reader finds out why, without slogging through swathes of backstory. The author doesn't save Amy’s big secret for too late in the book. She rations the reveals discreetly from act to act, so the reader doesn’t reach the end and fall face-first into an unbelievable and anti-climactic denouement. That Amy is a diver gives freshness to her character and a captivating milieu for part of the story. That she is flawed makes her a rounded person and easy to root for.
Roux is the woman I love to hate. Rarely for me, I have found an author capable of writing a character that raised my pulse; her toxic behaviour and insidious dialogue had me raging. But despite my antagonism, I appreciate how ‘whole’ Jackson has made her. Roux utterly believes in her raison d'être, which puts meat on her bones.
The other characters are less rounded but sufficiently vibrant that they are more than props. They are recognisable suburban housewives, children and husbands with flaws and troubles of their own. I feel the evolving relationship between Amy and Maddy is utterly believable.
Dialogue is pithy, description is almost poetic in places, but the writing style overall is chummy and easy to read. The plot has plenty of twists, but there is discreet foreshadowing, so the reader does not feel cheated at the dramatic end.
Never Have I Ever is one of those excellent stories where it is hard to decide whether to binge to get to the end and know what happens or string out the pleasure. I binged!