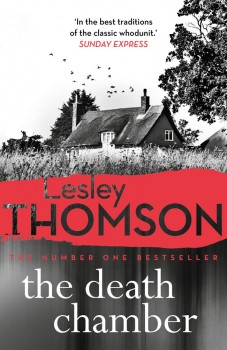 The shrewd Lesley Thomson has made a cottage industry out of the concept of combining those popular daytime TV programmes How Clean is Your House? and Midsomer Murders. The series, which began with The Detective’s Daughter, has now reached its sixth improbable episode with this confusing, but well-written adventure set in the heart of the Cotswolds. That allows her ‘townie’ protagonists, cleaning company boss and private detective Stella Darnell and her tube train driver partner Jack Harmon the chance to operate in an area where they are total strangers.

Thomson vigorously exploits their lack of country knowledge to create a suitably eerie setting for what is, at best, an improbable story which see-saws between being a real cosy and a hard-bitten PI investigation.

Forty years ago, a 17-year-old girl took a short-cut home from a village disco and was never seen again. Twenty years later, police find her remains while searching for another missing teenager, whose body was never found.

Stella, the daughter of a brilliant, but somewhat dodgy senior Met detective, has built a reputation solving cold cases. She is called in by the detective who handled the second disappearance – who lost his job for his mishandling of the case and is now seriously ill – to justify his actions and conclusions and clear his name. When she learns he had consulted her own father, Stella decides to take up the challenge, despite knowing that someone, almost certainly local, has got away with murder for so long and is likely to be willing to do anything to keep it that way.

Stella Darnell is without doubt one of the most original characters in British crime fiction. But despite a superbly eerie setting, unique and well-developed secondary characters and what should be a chilling plot, somehow this doesn’t cut it for me. My interest in PIs faded when Marlowe hung up his hat and in amateur sleuths when Poirot’s ‘little grey cells’ lost their brilliant intuition.

One of the themes of this convoluted story is how the past can come back to haunt the present and how little we really know about those closest to us. But to involve Stella’s cleaning company staff, their husbands and brothers in events which have their roots so deep in the past is straining credulity too far.

Thomson’s army of fans will love it. But if I disappear after this review is published, police should probably look for a woman, or women, clutching cloths and industrial strength disinfectants!