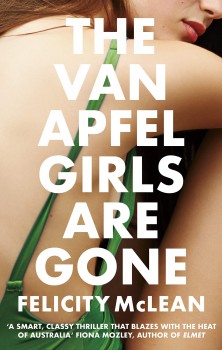 The Van Apfel Girls Are Gone

The disappearance of the three Van Apfel girls from their sleepy Australian suburb in 1992 has been a mystery which still haunts their friends 20 years later.

The events in this book are narrated by Tikka Molloy, mainly as the 11-year old she was in 1992 when they took place. She and her sister Laura, then 14, lived in an Australian suburb on the side of a river valley, and spent much of their time with the three Van Apfel girls, aged seven, 13 and 14, who lived close by.

Tikka is a schoolfriend of Ruth, the youngest, but all five gather by the Van Apfel family’s pool after school and are very close. The normal fears and uncertainties of childhood are complicated in the Van Apfel girls’ case by their parents’ religiosity. Their father uses his beliefs as an excuse for the verbal and physical abuse of his children, particularly the eldest two, Hannah, and Cordelia who most of all attracts his ire.

The feeling of tension over a long hot summer comes to a climax during the Showstopper, a community talent show held at an amphitheatre in the valley in the relative cool of the evening. The Van Apfel girls go missing, and despite desperate searching by police and local amateurs none of the three are ever seen alive again.

Twenty years later, Tikka is working abroad but returns home when her sister Laura reveals she is undergoing treatment for cancer. She discusses with her family what was known about past events that were never revealed to the police at the time and her feeling of guilt that her failure to speak might have prejudiced the possibility that things could have turned out better.

This is an impressive debut novel. As mentioned above, the majority of the narrative is put in the mouth of a young girl, one who comes across as particularly bright but immature, nevertheless. The author brings off the trick of making Tikka’s testimony sound authentic, with plenty of the misunderstandings and humiliations familiar to those who can recall their childhood, but at the same time incorporating sophisticated observations which would be beyond the child, without disrupting the illusion.

The book begins with an episode that suggests that some of the Van Apfels may have survived their disappearance, or at least Tikka wants to believe so. What evidence she has, however, is only accumulated slowly as the full tale is told, and the passing of time allows some close witnesses to speak without restraint. This is done in a natural way which does not give rise to the feeling that the author is purposefully retaining vital clues merely to sustain the suspense, something which can be frustrating.

Much of Tikka’s world is necessarily made up of childish preoccupations, sometimes illuminated by the insights of a precocious 11-year-old, sometimes funny. Whether this is to your taste or not, the details relevant to the disappearance are skilfully integrated into a well-written story which convincingly evokes the place and time in which it is set.