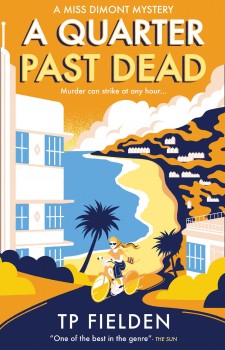 A Quarter Past Dead

Some residents of Temple Regis might look upon the new Buntorama holiday camp as a disaster for the seaside town. But not as much as a disaster as a dead woman being found murdered in one of the chalets. It falls to Judy Dimont to work out the twisty plot of dynasties and murder.

It's the 1950s and the first holiday camps are appearing in Britain. One has been set up in Temple Regis, much to the dismay of those residents who wish to maintain the up-market atmosphere and reputation of this seaside resort.

The most dismayed is Hugh Radipole of the snooty Marine Hotel as the Buntorama holiday camp has been set up next door. When a dead woman shows up murdered in one of the chalets, Radipole could be excused feeling a certain amount of schadenfreude at his rival, Bobby Bunton, but what is Radipole's connection to the victim? It is down to Miss Judy Dimont, chief reporter of the Riviera Express newspaper, to tease out the leads and motives in a case of love and dynastic troubles in a rich Anglo-Greek shipping family.

We're back in the world of fictional seaside town Temple Regis and its inhabitants who are moving slowly out of the shadow of World War Two and into the bright new world and possibilities of the 1950s. Some are moving more willingly and happily than others. This murder mystery highlights the snobbery and anxiety that the changes to the class system were bringing to light.

Through Miss Dimont's investigations we also see women trying to throw off the shackles that their sex has assigned them. While Miss Dimont follows this twisty little tale of romance, inheritance and changes of identity, her friend, Auriol Hedley, is being dragged back into her espionage past to investigate an admiral who may be spying for the Russians. And she is not the only one wishing to be free of the legacy of the war.

No matter what the actual season, Temple Regis always seems bathed in sunshine, if slightly tinted with nostalgia. Miss Dimont is a wonderful sleuth and companion even when some of her investigation can take a darker turn. It is always a pleasure to curl up on a journey with the wonderful (and occasionally) weird cast of characters.