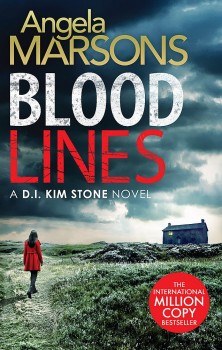 The victims could not be more disparate, but DI Kim Stone knows their shared cause of death is not coincidental.

At first, it looks like the first body is the victim of a messed-up robbery or carjack, the second, a drug-related crime. But the single stab-wound to the heart in both cases rings loud alarm bells for DI Kim Stone of the West Midlands Police.
Unfortunately, Kim, however determined she is to solve the seemingly unsolvable crimes, cannot give the inquiry 100 per cent, because her nemesis, Dr Alex Thorne, has sent a letter dripping with psychological games. And it’s the worst game of all – from her own prison cell, Thorne has almost managed to secure the release of Kim’s mother, the murderer of Mikey, Kim’s twin brother.
Twisted criminals snake their bitter crimes into Kim and her team’s heads. But for one of the team, this could be more than psychological torture…
This is the fifth outing with DI Kim Stone. After enjoying Marsons’ earlier Stone novel, Lost Girls, I was looking forward to another adventure with the feisty detective. Sadly, this story impressed me less. Certainly, there is no shortage of twists and red herrings. In fact, I would say there is almost a plethora, which contributes to the scrappy, fragmented feel to the story.
There is a sprinkling of chapters that are the points of view of two anonymous characters, one in the form of a diary, the other showing the reader that Kim has a dubious admirer. However, overall the book is written from Kim and Dr Thorne’s points of view in the third person, past tense.
There are multiple storylines, which in some ways add to the tension and the good pacing, but I was almost a mirror to DI Stone, never feeling entirely invested in the distinct crimes.
Kim’s long-incarcerated mother has a more active role in this book. Unfortunately, her presence, both on the page and in Kim’s head, give rise to a bit too much unnecessary, déjà-vu backstory.
Although this is not my first DI Stone read, it is my first time with Dr Alex Thorne. Calling a character a highly intelligent sociopath does not make her one. I found her voice unconvincing, her behaviour (though horrific) verging on ludicrous at times and her introspections childish. I could almost hear the brouhaha laughter emanating from the woman’s cell.
But there was worse; a character who thankfully had a small presence on stage but still managed to drive me around the bend. Marsons has created a West Midlands’ accent for the techy Stacey by grossly misspelling words at a regular interval. It is corny, trite and forced me to try to decipher what on earth the woman was saying, pulling me entirely out of the story. This was absolutely dreadful, and indicative of the overall theme of the author reproducing rather than representing dialogue.
Fortunately, Kim Stone is a thoroughly likeable badass. This helped me forgive her utterly stupid behaviour when she played into Thorne’s hands on more than one occasion. And her colleague Bryant is just uncompromising enough to be a believable sidekick and voice of reason.
Despite my reservations, I would be happy to stick with DI Stone; Blood Lines proved a fast, easy read and fabulous for a couple of hours of pure escapism.