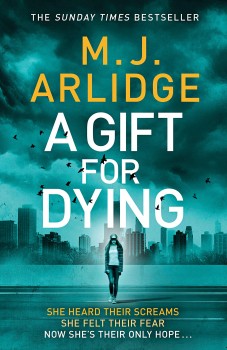 A Gift For Dying

A serial killer is prowling Chicago city, and teenager Kassie knows where he will strike next.

Kassie Wojcek, a teenage girl on the fringe, keeps her head down, avoiding interaction at all costs. She often skips school, preferring to smoke dope and roam the streets. Adam is a respected forensic psychologist, whose patients count among the most damaged people in Chicago, including those in prison. He and his wife, Faith, are awaiting the imminent birth of their first child. Despite the intensity of his work, life is almost perfect.
But when Kassie seemingly assaults Jacob Jones, she and Adam will step onto a dark road together. Kassie will lead Adam to the edge of sanity. He will lead her somewhere worse. Because Kassie knows too much about a serial killer’s murders, even before they happen.
I am always hungry for a simple, well-written crime novel; a meaty story with flavour oozing from a few choice ingredients. A Gift for Dying should have been exactly that. The plot centres on a distinct and fascinating character, Kassie. She has the unfortunate gift of sight in the most appalling circumstances, seeing peoples’ deaths whenever she makes eye contact with them. The closer they are to death, the more it affects her.
Unfortunately, the writing is so trite, melodramatic and awash with tell, the story is akin to a mediocre Christmas dinner. The plate is bursting with frills and trimmings while the meat is almost non-existent.
Kassie’s character, in many ways, is believable. She is an anti-social teenager without friends. She has an antagonistic relationship with her cold mother. On top of that she suffers with all the angst of being a freak. She wants her dreadful gift to mean something, but she is not entirely altruistic; if she can prevent the serial killer from murdering at least one of the victims, perhaps she can stop her own early demise.
Adam is a joke. Yes, he should believe Kassie or at least give her the benefit of the doubt. Yes, his introspection along with the consequences of his actions pay lip service to his unethical and unprofessional behaviour. But his conduct had my suspension of disbelief tumbling off an extremely high cliff. Many of his thoughts when a family tragedy happens are shallow to the point of being laughable and, at the same time, insulting to men (I hope).
Slightly more believable is Adam’s wife, though her last action is, while presumably necessary for the consequences, histrionic. The other characters are flat and stereotyped.
Tell overrides show, leaving the reader distanced from the characters and story. I am certain Chicago has a pulse weaving through its streets. Sadly, despite the author taking the reader through some less salubrious areas, there is no senses-exploitation in the description – the backdrop flatlines. Also, there are many throwaway comments that try to disguise a lack of legal and medical research.
The chapters are short. Let’s be honest; at approximately two pages each they are scenes, all 151 of them. Almost every chapter finishes with a short sentence that is either overdramatic or is an unwelcome injection of the author’s voice. It’s exasperating.
This story should have been tight, dramatic but is verbose and exaggerated. That said, the ending rose above my expectations. If the reader enjoys this style of writing, it is a fast, easy, thought-inspiring book that plays with the supernatural.