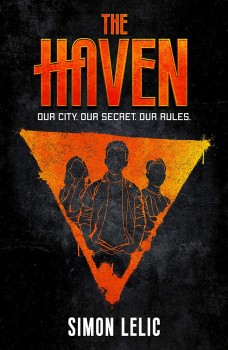 When 13-year-old Ollie Turner’s guardian is murdered, he’s taken in by a group of kids living a separate life under the streets of London and has to fight to prevent chaos and destruction being brought to the city’s streets.

Thirteen-year-old Ollie Turner’s life is ripped apart when Nancy, the police officer he lives with, is murdered. Ollie has lived with her since his parents were killed by a terrorist bomb in London, and without her, he has nobody. But in the mad scramble away from Nancy’s killers, he falls in with Dodge, a kid a couple of years older than himself. Dodge gets him away from the men who are hunting him and takes Ollie to a secret base deep in the heart of London, run by kids for kids – the Haven.

The towering, crumbling edifice accessed only through a series of secret tunnels is home to over a hundred kids. They live and work together, teaching each other the skills they’ll need to get on in the world when the time comes for them to leave the Haven. But the Haven has closed its doors to outsiders now, and Ollie’s presence is treated with suspicion, despite him being vouched for by Dodge. Flea, in particular, a prickly hulk of a boy, isn’t keen on Ollie and makes his feeling plain. Others, Flea’s sister Lily and the wheelchair-bound computer genius Jack, are more inclined to give Ollie the benefit of the doubt.

The kids in the Haven are doing their best to help other kids, and they’re on the track of numerous youngsters that have disappeared from London’s most notorious gangs. They’re convinced that the secretive ‘Mad’ Maddy Sikes is behind the disappearances, but they can’t prove it. She’s got a plan to destroy London and make a fortune in the process, and it’s only the inhabitants of the Haven who are on her trail.

Simon Lelic’s modern day reimagining of Dickens’ classic story of Oliver Twist overturns the vast majority of his stereotypes and pitches the young, resourceful Ollie against a vicious opponent who has a complete disregard for the value of human life, viewing fresh victims as nothing more than another number on her ever-growing tally of kills. The ever-present Bullseye appears as a huge, white husky rather than a bull terrier, and Sikes isn’t the only one who has changed sex. The allusions to the original are subtly done and can easily be ignored by anyone unfamiliar with either the book or its numerous adaptations, and of the later, this is by far the most original.

Lelic has served up a fast-paced ingenious romp around London, with an engaging cast of characters and a premise that will certainly appeal to anyone who enjoyed Robert Muchamore’s CHERUB series. The adults take a back seat in the Haven, apart from when they’re being suitably villainous, with only the reimagined Fagin – here Aunt Fay, the woman who first set the Haven up during the second world war – bucking that trend.

The story reaches a tense climax aboard Mad Maddy’s private jet at London City airport with Ollie and his new friends in a desperate fight to prevent her exploding chemical weapons throughout the capital. Even with more than a passing knowledge of Dickens, I still failed to see a major plot twist coming. Lelic doesn’t pull his punches when it comes to both the opening and closing chapters of the book, and provides a salutary reminder than in his world, no one’s safety is guaranteed.