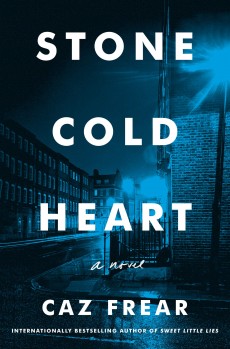 When a young woman is found dead not long after a party, there’s not exactly a shortage of possible suspects for DS Cat Kinsella to wade through.

DC Cat Kinsella is still at the stage of the job where she’s the one getting coffee for the team in the morning, which is ironic as she doesn’t even drink coffee. She just wants to get in and out in the morning without the bother of making conversation with anyone, but fails in that resolve one morning when the attractive guy who serves her every morning tries hard to start a conversation.

It turns out he’s having problems with his wife threatening him and wants to ask Cat’s advice. Unwilling to be drawn into his marital difficulties, Cat disengages from the conversation as quickly as possible to get on with her own morning. She advises him to go to his local police station and speak to someone about the problem and that’s all he’s going to get from her, especially when she has a strong suspicion he’s trying to chat her up.

The conversation comes back to haunt her when a young woman is found dead in circumstances that make murder the most likely answer. She is found in her flat with injuries to her head, and accident is quickly ruled out. To Cat’s discomfiture, Joseph Madden, the guy from the coffee shop, is one of a group of people who were with her at a party and was one of the last people to see her alive.

There’s a lot of simmering tension among the people who knew the victim, Naomi Lockhart, as well as the obvious problems between Joseph and his wife Rachel. He undermines her constantly, but she’s not exactly quick to leap to his defence when he’s questioned about the murder. Then there’s the acerbic Kirstie Connor and her husband Marcus, close friends with the Maddens, fitness instructor Kieron Drake, Naomi’s flatmate, and Clara, the Maddens’ daughter, who’s got her sights on doing criminal law at university.

Evidence found in Naomi’s flat quickly points the finger of suspicion at Joseph Madden, and the more Cat sees of him, the more she’s convinced he’s got a deeply unattractive, controlling personality, but she can’t shake the suspicion that he might be innocent.

Caz Frear sets up a complex personal dynamic between her characters, and it’s one that isn’t easy to disentangle amongst an ever-shifting game of lies, half-truths and occasional omissions. None of the characters come over as particularly pleasant, but they do come over as real people, with all the depth and difficulty that entails. I wasn’t drawn to any of them, but I certainly found them interesting.

Cat Kinsella, the narrator of the story, is equally interesting. There are hints at the issues she faced in the previous book, Frear’s debut, Sweet Little Lies, but never enough to act as major spoilers for anyone who wants to go back to the beginning. Cat has a difficult relationship with her father, who runs a pub, and it’s obvious that he does more than flirt with the wrong side of the law. Cat’s in a relationship with Aiden but seems to shy away from getting too close to him, and she’s not happy when she finds out he’s gone to the pub and met her dad. As a character, she’s certainly carrying around some baggage, but it hasn’t yet gone beyond the stage of hand luggage on a Ryanair flight.

She has a refreshingly good relationship with her work colleagues, particularly Sergeant Lu Parnell, who manages to be both father figure and friend. Their boss, acerbic DCI Kate Steele, is a strong personality, but she’s also supportive of Cat and her team, and comes over as the sort of guv’nor who gets the best out of her team. It makes a pleasant change in a police procedural to have a bunch of coppers who are both likeable and competent.

Likeable is certainly not a word I’d use to describe the rest of the cast, though, and particularly not Joseph Madden, and if being obnoxious was a criminal offence, he’d be seeing life from behind bars for quite some time. The interplay between the various characters is subtle, and it was hard to know where to look for someone other than Madden as the villain of the piece. Frear does a good job of setting up a wide variety of misdirection plays, and I enjoyed her handling of a large cast of possible suspects.

Stone Cold Heart proves that Cat Kinsella and her colleagues are more than just a flash in the pan on the police scene, and there’s plenty going on in her own life to prove background pressures for her when she returns. This is good-quality crime fiction with likeable, well-handled main characters and a cleverly executed plot.