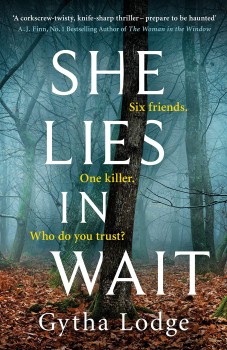 She Lies In Wait

The discovery of a body brings together the victim’s schoolfriends 30 years after her death and old secrets start to be uncovered.

Thirty years ago, a fresh-faced PC Jonah Sheens spent weeks doing house-to-house in the search for a missing 14-year-old girl, Aurora Jackson, who’d disappeared on a forest camping trip with her older sister Topaz and her schoolfriends.

Present day and DCI Sheens gets a phone call to say that a young girl on a camping trip with her family has discovered some remains in the hollow of a tree in the same forest. The discovery re-opens the case of the missing girl and this time it’s up to Sheens and his CID team to solve the mystery and find her killer.

The team bring in the six friends who were on that fateful camping trip, one that despite their claims at the time, involved under-age drinking, sex, and a secret stash of drugs. Slowly but surely the discrepancies in statements 30 years previously, and their time-faded memories of the events leading up to Aurora’s disappearance and immediately following it, start to show.

The dark shadows cast over their teenage years don’t seem to have prevented the friends from leading successful, if not entirely happy, lives, but the deeper the investigation goes, the more it seems that Aurora’s death was part of something bigger than a single tragic event on one weekend 30 years ago. The six friends might seem close, but there are secrets they’ve all kept, from each other and from the police, that now threaten to destroy them.

This is a riveting read from start to finish. It’s a masterfully written whodunit moving back and forth from past to present to tell the story as it happened in parallel to the investigation that unpicks the lies the six friends told to the police in the mistaken belief they’re protecting friendships when in fact the only thing they’re inadvertently protecting is a killer.

This stunning debut is hopefully just the first of many entanglements for Jonah Sheens and his team. While brushed over here a little for the sake of pacing, it would be good to get to know these characters a lot better.