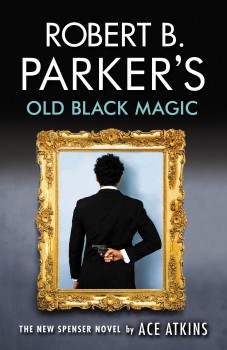 Boston PI Spenser is called in to investigate a theft, 20 years ago, from an art museum in the city and is soon plunged into the at times murky world of high-end art.

Boston PI Spenser (no first name, just Spenser) is asked by the director of a prestigious art museum to investigate the high-profile theft, 20 years ago, of three artworks that are still missing, despite strenuous police efforts at the time to track down the thieves. One painting, in particular, Gentleman in Black, by the celebrated painter known as El Greco, is worth a fortune and the museum is desperate to get it back, but no one has ever even come close to earning the enormous reward offered for its safe return.

The description of Gentleman in Black immediately conjures up a mental picture of El Greco’s dramatic style where colour takes primacy over form. His figures, often elongated and lacking conventional perspective, are immediately recognisable even to someone with only a passing knowledge of his work, and the missing Gentleman is as much of a character as any other in Old Black Magic.

For once, Spenser occasionally seems out of his depth in the at times murky world of stolen masterpieces and possible fakes, and takes refuge, as he always does, in donuts and smart-arse comments but underneath the casual exterior, he’s determined to track down the paintings – not for the museum, largely run by some fairly unappealing people – but as a favour to a dying friend, a man who’s dedicated his life to the return of the paintings.

Old Black Magic sees Spenser teaming up once again with old friend – and occasional foe – Vinnie Morris, whose knowledge of the Boston underworld is second to none. But if you’re expecting to meet the ever-impressive Hawk, don’t be misled by the blurb on the back cover as he doesn’t appear at all and is only mentioned in passing. Spenser’s partnership with Vinnie more than makes up for that, though, and together the pair are on excellent form.

Ace Atkins, chosen by Robert B Parker’s estate to continue the Spenser series, has proved to be far more than just a safe pair of hands. He’s now writing vintage Parker as well as the man himself, having taken the style back to somewhere in the middle of the series before the books became pared down to little more than the ‘he said, she said’ dialogue that characterised Parker’s later work.

Susan Silverman is as irritating as ever, though, so some things haven’t changed. She still picks at her food in a manner that’s guaranteed to annoy me and remains high on a pedestal where Spenser is concerned, but she adds little to the plot other than being an occasional sounding board for Spenser’s thoughts. That’s certainly not a criticism of Atkins’ writing, as Susan was equally painful in her creator’s hands, and remains a bone of contention among lovers of Parker’s work.

For me, it’s Spenser’s partnerships with the likes of Vinnie Morris that make the books. He’s at his best sparring with old allies both in gangland and in the police, although there have been some changes in the Boston police department, and Spenser can’t easily rely on favours from the likes of Marty Quirk and Frank Belson any more. The dialogue is as razor-sharp as ever, and the characterisation is achieved with minimal brushstrokes that still convey all you need to know about friend and foe alike.

You don’t have to have followed the series from the beginning to enjoy the book, but it adds depth if you do know Spenser’s history with the likes of dead mobster Gino Fish and current gangland boss Jackie DeMarco. The old school hoods are now giving way to a new generation, and it’s not as easy to rely on any sort of code of conduct being observed.

Spenser and his friends and enemies alike are aging, perhaps not in real time but there is a sense of time passing, and Spenser and Susan have now reached Pearl 3 in their canine companions. I like the fact that the characters aren’t static, as I’ve aged with them and we’ve got a long history together. Spenser epitomises the wise-cracking, hard boiled PI better than anyone, and long may his adventures continue in Atkins’ ever-capable hands.