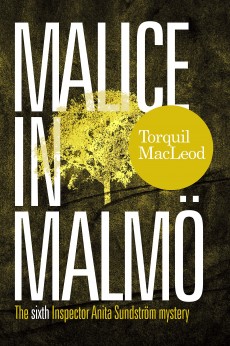 Inspector Anita Sundström of the Skåne County Police is under pressure. She has to deal with evidence-less cases of kidnapped businessmen and a murder of an infamous journalist. Her boss is in hospital, replaced by Anita’s nemesis, and her long-distance boyfriend is suddenly too close.

Inspector Anita Sundström is under pressure. First a leading Malmö entrepreneur is found bound and gagged on a park bench in the city’s cemetery. As the intensely private Mats Möller has paid the ransom himself online, the lack of clues and any evidence have made it near-impossible for the Skåne County Police to find kidnappers.
Soon another leading businessman is taken, and Anita and her colleagues race against the clock to find Peter Uhlig. This time the kidnappers want hard cash. The team prepares for action but gets outwitted in an inventive and spectacular way. Humiliation and anger follow.
As if this was not enough to occupy the already stretched small unit, the murder of an infamous malicious investigative journalist called The Oligarch becomes priority. The Finn, based in Sweden, has ruined lives of many prominent Swedes, mostly celebrities, hence the number of potential suspects is huge.
Away from all external challenges a change within the team makes th current situation more difficult. Anita’s immediate boss Erik Moberg suffers a heart attack, and although she takes charge of the investigation, she is soon replaced by her nemesis Alice Zetterberg. The women share a history going back to the Police Academy in Stockholm and a very unfortunate event when Zetterberg had been publicly humiliated at a press conference after the arrest of a wrong suspect. Clashes between Alice and Anita provide for a much complicated investigation going in different directions and creating more chaos when yet another kidnapping happens.
Malice in Malmö is the sixth book in the series. The precision of meticulous plotting, fluid narration and totally believable characters are the key features of Torquil MacLeod’s series. His writing moves seamlessly between high tension drama, subtle historical and social background, and very normal ordinary yet exciting events. Throughout the book you can feel his real fondness for the area, the landscape and atmosphere, and hunger to know more.
Anita’s long-distance romance with Kevin, a British detective, full of a whole range of emotions, plus the reality of living in a multicultural society, add authenticity to his heroine. Anita takes risks, follows her gut feeling, makes mistakes and finds out whom she can trust. Her motto would be: ‘Pretend to listen to my instructions then totally ignore them and do your own bloody thing,’ nicely and accurately summarised by the convalescing Moberg. For the fans of Swedish detectives: she’s as stubborn as Saga Norén from the TV series The Bridge but socially adept, and as focused as Kurt Wallander but much more cheerful.
MacLeod provides her with enough experience and reality of the job to make her a strong, imperfect person in her own right. As far as the plot is concerned the author grabs themes from various places. New technology, old money, ties to the South American criminals, bribes, revenge and coffee are all connected in a way that does not seem initially obvious but which eventually turns into a very satisfying, intelligent and occasionally funny story – not hilarious, but more reflective. An additional element that I found very interesting comes from the relations between two neighbours Sweden and Finland, and how it has shaped the perception of citizens of both.
I’ll be reading the other books in the Malmö Mystery series: Murder in…, Missing in…, Midnight in… and Menace in… as the debut Meet Me in Malmö which I read and reviewed ages ago is definitely not enough.