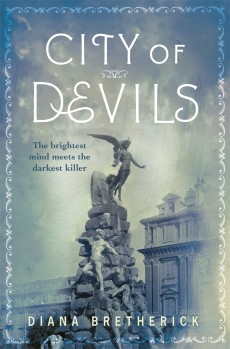 Young Edinburgh doctor James Murray travels to Italy to study with Cesare Lombroso, the controversial late 19th century criminologist and is plunged into a series of sadistic and ritualistic killings which threaten his mentor.

A senior QC once told me that words are the most important weapon in a criminal barrister’s armoury. If you can gain and hold the jury’s attention, he said, you are halfway to making your case. Diana Bretherick has clearly put her earlier training to good use – and there’s no need for the jury to retire to consider its verdict on her complex and gripping debut. It’s an out-and-out winner with a style and attention to detail which will remind connoisseurs of the genre of CJ Sansom – and praise does not come higher than that!

Set in the city whose unenvied nickname provides the title – Turin was infamous for its obsession with Satanist cults – in the dying years of the 19th century, this is as much a ‘factual’ history of the early struggles for acceptance of the application of science to detection and the often haphazard, piecemeal and stuttering development of the art of profiling as we know it today.

Famous names from early criminology make an appearance – Alphonse Bertillon, creator of the first identification system based on physical measurement, the controversial Austro-Hungarian neurologist Moriz Benedikt and the even more controversial Cesare Lombroso, whose theories on criminal behaviour dominated the late 19th and early 20th centuries.  The Italian also invented the lie detector, but his over-expansive personality and slapdash approach, added to a mediaevally barbaric attitude towards some racial groups and women, meant his work, described as ‘a magnificent tangle of brilliance and nonsense’, never received the status it was due.

Lombroso becomes the focus of this enthralling and original story. James Murray, a young Edinburgh doctor, fascinated by the criminal mind and burdened by doubts over his own part in his doctor father’s disastrous mental breakdown, goes to Turin to study with him. Within hours of his arrival a horrifically mutilated body is found at the foot of a statue known as the Gates of Hell, together with a note which appears to implicate Lombroso. More killings – and mutilations – follow as Murray, aided by Lombroso’s other trainee, Salvatore Ottolenghi, who went on to become a famous criminologist and found Rome’s School for Scientific Policing, and Tullio, a surprisingly modern Public Security policeman, hunt a truly evil killer.

Is Lombroso being accused or is he challenged to prove his theories? Are his many intellectual and is religious enemies attempting – this is Italy and the influence of the church is still enormous – to frame him? Bretherick weaves the strands together into a complicated tale that ends with a genuinely surprising revelation with real originality and narrative energy. Full of suspense, eerily Gothic in parts, it combines a doomed love story with vivid descriptions of salons and symposiums and an often understated, but riveting account of one of Italy’s great cities at the turn of the century, with enough believable and realistic action to put all the posturing into grim perspective.

This is a fine debut which should establish Bretherick as a writer of forensic skills – and definitely one to watch.