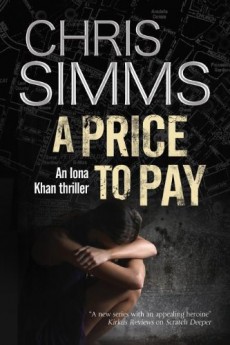 A Price to Pay

DC Iona Khan and her colleagues seem to be one step behind as they investigate the death of a man in his computer shop and the case of a girl leaping to her death from a motorway bridge.

DC Iona Khan is a world away from Chris Simms's previous series hero DI Jon Spicer. He was a grumpy rugby player, with a suave gay sidekick. She's a petite mixed race 20-something, who's ended up as rather a loner after her previous case brought down a racist DCI.

Scratch Deeper, the first book in the Iona series, wasn't at all bad, but it never grabbed me in the way A Price to Pay did. I devoured this one in two evenings and genuinely wanted to know how Simms was going to resolve his busy plot.

A man is found burned to death in his computer shop. A nasty bit of work is going around Manchester trying to retrieve – with extreme violence - a mislaid laptop. Meanwhile, an English girl has been used as a suicide bomber in the middle East. And another girl has leapt from a motorway bridge – and she bears a spooky resemblance to Iona.

Iona and colleagues seem to be several steps behind as they try to pull together the seemingly disparate events. She's still the outsider, and has her doubts about a new DS who she ends up working with. And she still has to deal with former boyfriend Jim, a uniformed sergeant, whose drinking problem seems to be getting out of hand.

Simms's books always capture the atmosphere of Manchester. This time he takes the reader into student houses and children's homes. Several of the plot threads in this book could have come straight from newspaper headlines.

His characterisation is thinner among the supporting cast, although Iona is a credible and appealing main character with her quiet confidence and determination to see off the colleagues who are treating her badly. Simms strikes a careful balance between the professional and the personal – the ongoing saga with Jim never becomes too intrusive. And the subtle backstory with Iona's Pakistani father has echoes in the present-day police enquiry.

A Price to Pay is an immensely solid page-turner, with hard-edged plotting and a gutsy leading woman whose determination reflects her old hockey-playing label of the baby-faced assassin.