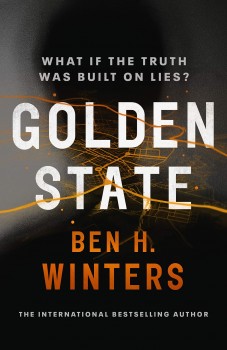 In Golden State the most serious offence is to lie – punishable by exile. Specially skilled Speculators are sensitive to lies and seek out liars. Such talents make it difficult for a Speculator who suspects that the State is lying.

In a dystopian future, in the Golden State, Laszlo Ratesic, unhappily divorced and overweight, is a very effective Speculator, born with the talent of recognising when someone is lying. He is persuaded to take on a partner, Alysa Paige, to teach her the workings of the organisation, seeking out things that are not Objectively So.

The first day they are called to the scene of the death of a man who has fallen from a roof. There is suspicion of an anomaly. Together Laszlo and Alysa investigate and find increasingly entangled evidence that there is corruption in the organisation. Their search leads them to confrontation with judges, senior police officers and the state itself.

This book is extremely well written. The state, clearly California is some post-apocalyptic time, is convincingly described, with a draconian government that controls thought by outlawing lies and constantly reaffirming the unconvertible. People greet each other with truth-affirming statements. Metaphor is frowned upon as being inherently untruthful. It is only as Laszlo begins to expose cracks and uncertainties in the organisation that his faith in the institution becomes rocked.

The plotting is very convincing. The story is largely told in the first person by Laszlo, who’s dirty, untidy, a bit disorganised, very hurt by his divorce and a highly effective Speculator. He clearly lives in the shadow of his very successful Speculator brother and is very devoted to his line manager. The growing respect he forms for Alysa, as well as personal affinity, as her effectiveness becomes apparent is described with sensitivity. I liked the main protagonists, faults and all. I wanted things to go well for them. I wanted them to be right. Which all kept me reading, eagerly.

Although the book has shades of 1984, it has less of the bleakness and more optimism. Nonetheless it is chillingly believable. I hope this is the first in a sequence as I want to know what happens next.