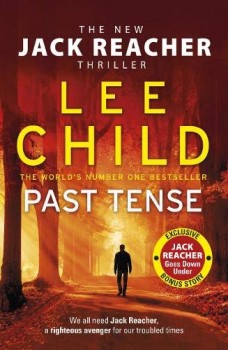 Jack Reacher happens upon the home town of his long-deceased father. Patty and Shorty’s car breaks down near an isolated motel in the same area.  After a long, eventful time for all concerned they separately arrive at the same place – a dark, isolated forest.

Jack Reacher, an ex-military police commanding officer, is used to living his life on the move. He decides to take a big trip from a small town in Maine down to the South and begins to hitch-hike his way on the back roads. His first lift drops him off in the middle of nowhere. The only signpost points to a town called Laconia. He recognises this as the place where he had always been told his father was born, and he decides to go and have a look, and maybe try to find his father’s house.

Meanwhile, a couple from Canada are making their way to Florida and pass along the same road, towards Laconia. Their old car is not going well and when it appears to be about to break down completely, they decide to follow a signpost to a motel in the middle of a forest.

Each storyline develops through the book with Jack Reacher initially staying in Laconia. He enlists the help of the local police and archivists, but also gets into a certain amount of trouble. Laconia lives up to its name and doesn’t want any trouble, so Jack eventually is asked to leave. He sets off to walk to his father’s old place out of town. Patty and Shorty by this time are settled in their motel room, waiting for help to arrive for their car.

Each of the plotlines develops fairly slowly in keeping with the apparent slow pace of life in this part of rural America. Several attempts are made to build the tension: for example, on two occasions Jack wakes up in the middle of the night – what was it that woke him? The Canadian couple find that their car problem has been made worse by one of the motel staff, now totally refusing to even start – how could that happen?

The context of a small American town is well-drawn with a strong sense of people living in each other’s pockets. The past, too, is brought to life with accounts of large families living out in the sticks and only occasionally visiting the local town. Indeed the whole idea of isolation runs through the book: the motel, right in the middle of a huge forest, with a rubber hose across the road two miles away to alert them to the approach of visitors; a forest where the trees are planted close together with thick undergrowth in places, making walking difficult, almost impossible at night; the apple orchard planted on the line of an old unused road, the cause of a feud between neighbours.

Eventually the two storylines come together but in a somewhat contrived way.

The author writes with his usual minute attention to detail, particularly regarding the thought processes of Jack Reacher, who always wants to be ready to fight his way out of trouble.  It is almost as though the reader is alongside him, aware of the atmosphere of the scene, often tense and waiting, alert, for something to happen.

Overall this is an easy read with the pace eventually picking up in the final chapters, as the Canadian couple’s storyline at the motel is resolved with Reacher’s help. Past Tense is not perhaps one of the best Jack Reacher novels but an acceptable, well-written and finally fairly compelling read for a holiday escape.