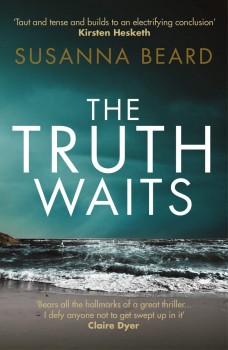 When Anna discovers the body of a young girl on a deserted beach in Lithuania, her perfect life begins to unravel.

It was supposed to be a short break in Lithuania, a country where she also has business dealings. Now Anna cannot get her flight home because of a volcanic eruption in Iceland. Frustrated and needing to get out of the hotel, she walks along the deserted beach, not knowing her life is about to change.

The body she finds is that of a young girl. And it looks like murder. The police question Anna for hours, but she has little to offer them and eventually they let her go. The following day, she meets other stranded guests: Gavin, a businessman with clubs and casinos in the area, his wife, Charlotte, and Will, a tourism journalist. Though Anna instinctively dislikes Gavin and Charlotte, Will is another matter. When they finally get back to England, their casual relationship soon deepens, and Will moves in with Anna.
Anna is obsessed with finding out what happened to the murder victim. Will wants her to let it go. But with her lover becoming increasingly mysterious and absent, Anna must discover if Will is telling her to stop her dangerous investigations to protect her or himself.
This is less of a psychological thriller and more an international crime thriller that touches on the dark subject of sex/human trafficking. There is a degree of sugar-coating in this dark topic, but it is acceptable and believable, as viewing it through the protagonist’s eyes is naturally limiting.

Although the author has written this in the present tense, the style of writing and the third-person point of view is rather distancing. Perhaps that is why although Anna is a pleasant person with the obligatory flaws and secrets, I didn’t particularly connect with her. I also found her increasing obsession with finding out the truth about the girl’s murder lacked conviction. It is entirely plausible that Anna would want to know, particularly as her own secrets unravel. But her introspection lacks passion.

Will, though more enigmatic and less on scene, is probably the character who intrigued me enough to keep reading. The love-interest between an older woman and younger man is fascinating but needs more depth. It would have been a terrific occasion to show Anna’s insecurities, wants and fears and general character development, but this opportunity never quite gets to the finishing post. In terms of Will, there were no surprises in the denouement.

The author sets the scene and atmosphere well with brief but convincing description. Other than the dialogue, which at times is a little forced, the writing is strong. However, I found the overly easy communication between Lithuanians and anglophones pulled me out of the story. I am certain I didn’t read that Anna was bilingual, and I am not convinced that learning English would be a high priority for some of the people she meets.

Overall, I enjoyed the book, and the ending was satisfactory. Despite its ugly topic, The Truth Waits provides an easy read and a little escapism. But even though I journeyed with Anna and visited some new and interesting places, I remained a spectator. She didn’t manage to drag me from the safety of my sofa into another world.