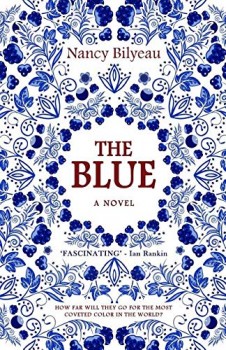 Huguenot-descended Genevieve Planché longs to be an artist, but is sent to become a porcelain decorator and becomes involved with industrial espionage that may aid England’s enemy.

As a cynical former soldier and an even more cynical crime and investigative reporter, I’m not too easily impressed by love stories, no matter how exciting and well researched the background. But Canadian author Nancy Bilyeau tapped a hitherto unsuspected romantic streak in me with her magnificent Tudor trilogy The Crown, The Chalice and The Tapestry and now has done it again with her new novel set two centuries later!

Genevieve Planché is a strong-willed and adventurous character, feisty, emotional, modern enough to sleep with her fiancé. No sooner does she think of a solution to a problem than she rushes into action, frequently disastrously! And Bilyeau, a direct descendant of Pierre Billiou, a French Huguenot who immigrated to New Amsterdam (New York) in 1661 and whose stone house is the third oldest in New York State, should know.

The Huguenot connection, the story of their extreme Calvinist Protestantism and their vicious persecution by the ‘Sun King’, Louis XIV, the absolute ruler of France, then the most centralised and strongest power in Europe, is just one of the strands which makes this story so memorable.

Louis’ repeal of the Edict of Nantes effectively forced the Huguenots to convert or emigrate, virtually destroyed the Protestant minority and made the thousands who fled across the Channel the first ‘refugees’ – literally seeking refuge from his regime’s hangings and burnings.

During Louis’ long reign, foreign policy was defined by war or preparation for war and he ensured his ministers’ job was to create commercial, tactical and strategic advantages for his military. England and France were in conflict on many fronts as the situation built towards the Seven Years War – the first truly global conflict.

Against this setting, Genevieve, who lives with her artist grandfather, in London’s Huguenot community, has talent as a designer and ambitions to become a real artist. Cruelly rebuffed by an ageing William Hogarth and the rising Joshua Reynolds, she catches the eye of a mysterious aristocrat who offers her the chance to study in Venice –  but only if she will accept the post as a porcelain decorator in Derby and use her position to help him steal the secret of an alleged new shade of blue which could transform the industry, already the most lucrative in early 18th century manufacturing. In her quest to uncover the chemical formula for the secret, she faces double-dealing, espionage and murder.

Genevieve, who questions the morality of the operation, the possibility of imprisonment and casting aside the chance at true love, finds herself at a crossroads. Her vocation necessitates producing work that will sell. Her ingrained religious conscience and the ethical code she has derived from it offers a struggle with temptation and with desire, passion and ambition come the need for dissimulation, discretion, and compromise.

No less afflicted is the man she comes to love, the chemist behind the creation of the near-mythical transcendent blue, an obsession he shares with many others including two kings. It’s kept under guard at all times, and only his pragmatic philosophy keeps him sane – and will eventually ensure he and Genevieve escape from captivity in Sevres, the heart of the French porcelain manufacturing.

This historical read, replete with crime and intrigue, weaves together fact and fiction together to produce a highly entertaining glimpse of the world of porcelain. All the protagonists are believable and interesting – particularly Madame Pompadour, mistress of Sevres and the Sun King who dominates an all-too-brief appearance – and the narrative has real pace.

Above all it is a story about creativity, love and trust. It’s immaculately researched and beautifully written, and will please anyone who loves a cracking adventure, a sensitive and believable love story or is simply interested in the art of porcelain making and the importance of colour to 18th century artists.

Harsh critics, or those who fail to penetrate to the heart of this superb book will say the ending is an unlikely cop-out. In reality, it shows the depth of Bilyeau’s research, for what at first reading reflects an unlikely scenario, is more than possible given Louis XIV’s mercurial character and obsessions.