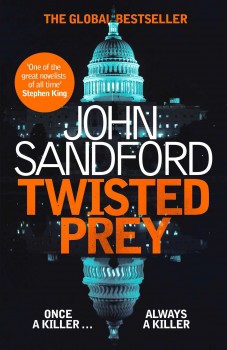 When US Congressman Porter Smalls’ car is forced off the road, local law enforcement are not persuaded it was intentional. But Smalls knows Lucas Davenport, who he trusts to find the truth.

After many adventures in his home in Minneapolis, Lucas Davenport has joined the US Marshals Service, but life is quiet when he receives a request for help from Senator Porter Smalls. Smalls barely survived when his car, driven by a companion, left the road as they were leaving a cabin a few hours outside of Washington.

Smalls is insistent that the car was rammed off the road, but local law enforcement can find no indication of impact with another vehicle. He also thinks he knows who was behind what was plainly a murder attempt – another Senator, Taryn Grant. Davenport has met Grant before and believes that she has killed to advance her career, although he was not able to prove it.

The plot proceeds in much the same way as we have come to expect from Sandford: Davenport skilfully exploiting small hints to develop ever more evidence, and his foes obstructing his investigation by all means necessary. The reader knows only too well that Davenport’s suspicions are confirmed, as we hear Grant plotting to secure the US Presidency and discussing options with the men who hope to benefit if her bid is successful.

And these operatives are serious men. Closest to Grant are Parrish and Claxson, who run crooked defence procurement companies which have generated great profit at the expense of American lives lost in action to sub-standard equipment. Under them are hard ex-military types who have killed on service and are ready to do so again. The decision to take action against Davenport personally puts him and his family in extreme danger.

Davenport is helped with his investigations by Marshals Rae Givens and Bob Matees, who supply both professional muscle and a mirror for the mildly disparaging wit that flows between Davenport and his colleagues. This is always helpful in deflating any tendency for pomposity should Davenport’s wealth, chiselled features, perfect family, and enthusiasm for fashion threaten to inflate him unduly.

Anyone familiar with Davenport’s tenacity will be unsurprised to hear that his efforts, supported by police and the FBI, eventually put pressure on Grant and her men. This leads to a thrilling finale where Davenport, the hunter, may have another string to his bow.

This is the 28th Prey novel starring Davenport, and you might reasonably expect that his adventures are starting to pall. I detect no such drift, however, with gripping incidents from the beginning to the last page, the very definition of a thriller you can’t put down.