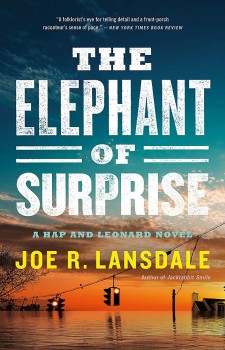 The Elephant of Surprise

Crime-fighters Hap and Leonard rescue a girl targeted by the Dixie Mafia and battle to protect her in the middle of one of the worst storms seen in East Texas for years.

This is the 12th outing for Hap and Leonard. Both now have partners and Hap is a family man: his wife Brett, the brains of the organisation, daughter Chance, Reba the mouthy adoptee and Buffy the dog. They are still up for a fight though, and if anything, even closer friends, despite maintaining a running verbal contest of wit and repartee.

Their latest adventure begins at high speed from the off. The pair are driving in heavy rainfall when they come across an Asian albino girl bleeding badly from the mouth. Hap and Leonard manage to evade her pursuers and get her to hospital, but the bad guys soon show up, festooned with weaponry, looking to finish what they started.

The rest of the book continues at the same breakneck pace. In one of the rare pauses in the action, Hap and Leonard manage to secure the help of Manny (Manuela), the acting police chief, and take refuge in the local police station. They establish that the girl, Nikki, is witness to some of the illegal activities of Wilson Keith, a big wheel in the Dixie Mafia, and he is determined to kill her to avoid any loose ends.

Keith has the resources to assemble a team of men used to violence, including a couple of particularly noteworthy characters – an enormous but fast-moving black guy with a range of automatic weapons, and Kung Fu Bobby, a mercurial Chinese acrobat.

If you have come across Hap and Leonard before, then the somewhat cheesy exchange of off-colour jokes, mock insult and buddy camaraderie will be familiar. There is more action in this episode than most, and the background of tornadoes, heavy storms and flooding adds appreciably to the drama. This being Texas, the range of weaponry on display is of course very impressive, and your man Hap uses his skills as a marksman to good advantage.

Despite the colossal body count, Hap and Leonard stories are a great deal of fun, especially if you don’t expect the plots to make a great deal of sense. The shootouts are genuinely exciting. As regards the wordplay, the title being an example, I cannot put it better than their friend the cop did: ‘That’s funny,’ Manny said. ‘Just not enough.’