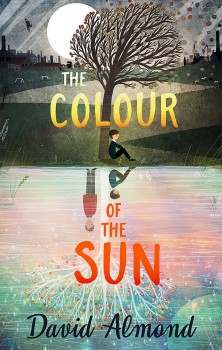 The Colour of the Sun

Davie has reached the stage of the summer holidays when each day seems to stretch endlessly into the next. He can’t decide what to do, so he rummages around in his bedroom, picking up various things that he used to play with when he was younger and stuffing them into a rucksack his dad gave him. His mum is insistent that he gets so fresh air, so Davie reluctantly goes out for a wander.

One of the first people he meets is old Wilf Pew, who always wears a long grey coat, no matter what the weather. He thinks it disguises the fact that he’s got a prosthetic leg, but Davie and everyone else in the small town where he lives knows perfectly well that it doesn’t. Wilf, like nearly everyone Davie meets, offers him some advice, in rather cryptic terms. Davie doesn’t particularly want advice, but he’s polite, and even eats the rather fluffy sweet that Wilf fishes out from the depths of his pocket.

Davie’s day gets considerably more interesting when one of his friends excitedly informs Davie that he’s just seen a dead body. Gosh insists that Jimmy, one of the notorious Killen family, has been murdered and his body left in the rubble of the old church that’s being demolished. As Gosh was the one who found the body, he manages to blag his way back through the rather half-hearted police cordon, where a young officer is waiting for some back-up.

Gosh is right, it is Jimmy Killen, and he’s definitely dead. And Davie thinks he knows who’s responsible. It has to be Zorro Craig, as the two boys have been threatening to kill each other since they were kids, and their families have been feuding for donkey’s years. It’s not every day of the day of the summer holidays that you get to see a dead body.

What follows is an increasingly surreal series of meetings as Davie wanders around town and various places nearby. He talks to his father, who died a few months ago, and it’s hard to tell whether Davie is talking to a ghost or simply playing out the meeting in his own imagination. And so it goes on. He’s followed around by an ugly dog that keeps trying to lick him, and he even meets the ghost of Jimmy Killen, or does he? It becomes increasingly hard to tell what is real and what isn’t, but – like Davie – the best advice is simply to go with the flow and lose yourself in the enjoyment of this deeply lyrical book for teens and younger readers.

David Almond delivers pitch-perfect dialogue for the small, unidentified and rather timeless north-eastern town. Like Davie, I was frequently told off for saying ‘nowt’. It didn’t stop me, and it certainly doesn’t stop him, which is exactly as it should be. There’s plenty of time to grow up, but not plenty of time in which to be just a kid. There’s a beautiful supernatural angle to the tale as well, and it turns out not to be the one I was expecting. Read the story for yourself and see if you can decide which of Davie’s meetings is with a ghost. The Colour of the Sun is charming, at times challenging, and always memorable.