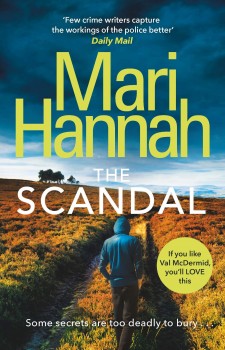 A stabbing in Newcastle city centre comes as a shock to DS Frankie Oliver when the victim turns out to be someone she knows.

Newcastle city centre oi the run-up to Christmas is busy, despite the freezing weather. When a young man is stabbed to death after visiting a cashpoint, the case initially looks like an attempted robbery that went too far, but for DS Frankie Oliver, this is more than a random stabbing. The victim is someone she knows well, even though she hasn’t seen much of him in recent years.

Chris Adams is a 32-year-old reporter on one of the local papers, and Frankie thinks his death might be linked to a story he was working on. But she gets no help from his boss, an objectionable man who loses no opportunity to follow the murderer’s actions and put the knife into Chris, except that in his case, the knife is metaphorical rather than literal.

Frankie’s boss, DCI David Stone is concerned that she’s too close to the case and is considering an approach on the subject to Detective Superintendent Bright, the head of CID and a long-term friend of Frankie’s father, himself a former cop. But Bright seems to see no problem with Frankie remaining on the Murder Investigation team, despite Stone’s misgivings.

Their investigations lead them to some notes kept by the murdered man that bolster the theory that he was working on something potentially big. They also uncover a potential link with the case of a missing woman, Nancy Carver, who walked out of her job one day and dropped completely out of sight. Her son reported her missing, but the police investigation concluded that she had moved abroad and simply didn’t want to be found, a view that her daughter had come to accept, even though she was left both shocked and saddened by her mother’s actions.

Frankie Oliver and David Stone make a good team, despite the fact that her sparky, headstrong character stands out in sharp contrast to his calmer, more methodical approach. The pair have a strong bond, but it’s tested to the limit in this book, with Frankie sailing very close to the wind and keeping things from her boss that don’t go down at all well when some things rise to the surface. I must admit, there were times when I wanted to shake the pair of them, but in general they remain a pretty good team, complementing each other’s strengths – and weaknesses. They both have a fair amount of backstory, but there are enough mention of the past to make The Scandal easily digestible as a standalone.

There’s a good cast of supporting characters, including Stone’s nephew Ben, still shadowing veteran journalist Belinda Wells, and eager for something to get his teeth into and when he goes off-piste to do some of his own investigation, there’s no guarantee of a happy ending, as a double murder now looks like it could easily become a triple.

Mari Hannah is skilled at weaving character-driven plots where all the various strands do come together, although it often takes some time for the warp and the weft to form a recognisable pattern. Her police procedurals come over as authentic and the series has established itself in its own right as a worthy successor to her Kate Daniels books.