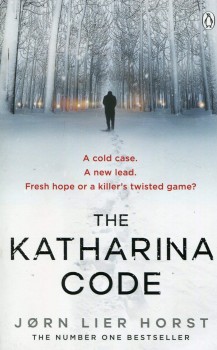 On the anniversary of Katharina Haugen’s disappearance 24 years ago, Chief Inspector William Wisting looks through the case files as he does every year. He also visits her husband Martin. This time it seems that the grieving husband has gone missing – and he might have been involved in another cold case involving a kidnapped teenager.

Katharina Haugen went missing 24 years ago, leaving behind her heartbroken husband Martin, a mysterious string of numbers written on a piece of paper, and a methodically packed suitcase. Since then on October 9 each year Chief Inspector William Wisting looks though the files of this unsolved case and analyses all the evidence again, and then a day later visits her husband. What has started as a way to try to comfort and understand the grieving man has turned into a reluctant friendship as together Wisting and Martin reminisce about Katharina and ponder life questions in general.
This time on the anniversary of this miserable event, however, Martin is missing, too, and though Wisting feels uneasy and concerned, he has to prepare to investigate another missing person’s case of a 17-year-old girl who disappeared as she left a party one night. Nadia Krogh, daughter of a local multi-millionaire businessman, was abducted by unknown perpetrators who demanded a huge ransom. The money was delivered to the arranged place but never collected, and initially her boyfriend became the main suspect, and was promptly charged by the police. This happened in 1987, two years before Katharina’s case.
Now the modern forensic methods have helped to establish that Martin Haugen’s fingerprints were present on the ransom letter, made of cut-out words from a newspaper. To help with the new search, the ambitious insomniac Adrian Stiller from the Cold Cases Group at Kripos in Oslo arrives at Larvik police station to push all possible buttons and establish that Martin was responsible for Nadia’s disappearance.
Stiller wants Wisting to work secretly and elicit a confession from Martin during a weekend fishing trip, and also asks Line, Wisting’s daughter, to write a series of press articles and to work on podcasts to jog the memory of anyone who might have remembered the teenager’s case and to come forward, and at the same time to set a trap for his suspect. As discreet monitoring is put in place, both father and daughter begin separately to follow Stiller’s plan.
In The Katharina Code, translated beautifully by Anne Bruce, Jørn Lier Horst puts his main character in a very uncomfortable situation as working undercover is alien to Wisting and has affected his self-esteem: ‘In all his years in the police, he has endeavoured to be honest, direct and combative in encounters with both colleagues and criminals. Hence it is very interesting to follow the process and get to know another side of Wisting as he keeps some information secret from his journalist daughter and at the same time strives to influence Martin and get a confession while assuming the normal friendly demeanour.
The tension increases as both men spend more time together, while fishing and cooking in an isolated cabin in the woods, and their means of external communication begin to fail. The relationship, quite formal yet coloured by years of memories and slowly built trust, unravels and leads to a shocking finale.
The novel does not focus on the fireworks and excitement of a current urgent investigation but instead develops slowly to explore the past, guilt and how someone ordinary might cross the line and then harbour painful secrets. It’s a good, solid mystery about blame and circumstances.