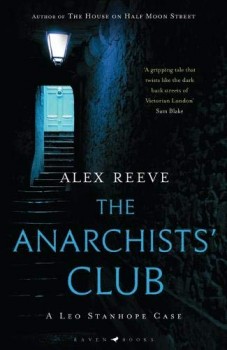 When a woman’s body is found in a shallow grave with Leo Stanhope’s address in her purse, the resulting investigation threatens Leo’s carefully guarded secret.

Leo Stanhope prefers to keep a low profile. He works as a coroner’s assistant in Victorian London and spends his evenings playing chess with a friend. But when the body of a murdered woman is found in a shallow grave at a club frequented by members of an anarchist movement, Leo’s hopes of a quiet life are shattered, as his address is found in the dead woman’s purse.

The police ask Leo to accompany them to the club to help with their enquiries and Leo is shocked when a man he knew years ago, in what now seems like another life, blackmails him into giving him a false alibi, by threatening to expose the one secret that Leo wants to keep above all others – the fact that he was known from birth as Lottie Pritchard.

Alex Reeve’s debut, The House on Half Moon Street, introduces Leo Stanhope, and it was good to see him return. Leo is a complex character, doing his best to live and work as a man, lodging with his friend Alfie and his clever teenage daughter Constance, who is determined to see Leo get out and enjoy himself more. Leo wants to put his upbringing as a girl behind him and live the life he knows to be his, but this is threatened by the police investigation into the murder of Dora Hannigan. Leo is also concerned about the fates of Dora’s two children, a young boy and girl who have lost their only relative and appear destined for the harsh life of an orphanage unless Leo can find a way of saving them.

Leo is helped in his investigations into Dora’s death by Rosie Flowers, a widow who runs a pie shop, who was thrown together with Leo in the previous book as they hunted the killers of both the woman Leo loved and Rosie’s husband. Leo and Rosie’s relationship is a stormy one, beset by misunderstandings and small unintentional cruelties, and there were plenty of times when I wanted to yell at them both.

The anarchists of the title are plotting direct action against a wealthy mill owner and there’s plenty of intrigue in this complex, enjoyable historical thriller, as Leo pursues the truth with an engaging mix of tenacity and compassion. It was hard at times to keep up with the rapidly shifting reveals during the climax and every time I thought I’d got a handle on who the murderer was, the rug was sharply pulled from under my feet again in a series of cleverly managed revelations.