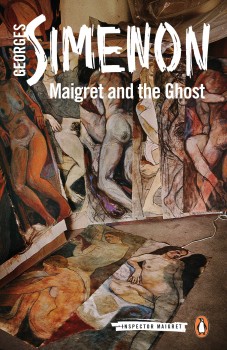 Maigret and the Ghost

Inspector Lognon of the 18th arrondissement is shot in the street and is in intensive care.  Apparently, he had been in the habit of visiting a young woman’s apartment – something Maigret finds difficult to believe of Inspector Hard-Done-By. But he cannot interview her because she has disappeared.

Lognon is a police inspector in the 18th arrondissement. Like many other policemen in Paris, he would regard it as a promotion were he to be transferred to the Quai des Orfèvres but he does not possess the knack of passing examinations. Having worked frequently with him, however, Maigret knows that he is persistent and meticulous in his work.

When he learns that Lognon has been shot in the street and is dangerously ill in hospital, Maigret feels an immediate sympathy for the man known as Inspector Hard-Done-By and, instead of going immediately to the crime scene, he heads for the hospital to which Lognon has been taken. There he finds that the shooting is not necessarily fatal and that Lognon has at least a chance of surviving.

As he begins to investigate the case he is aware that it is very personal to him. It becomes, in addition, very puzzling when he discovers that Lognon has been in the habit of calling on a young woman who lives in the house outside which he was shot.

The investigation begins with enquiries being made at houses in the vicinity of the shooting. Maigret learns that the woman with whom Lognon had been associating has left her apartment and disappeared. He immediately instigates a search for her, having been told by her former fiancé of the places they used to visit when they were engaged.

Maigret soon becomes aware of an old recluse named Maclet who, crippled with rheumatism, drags himself around a very dirty flat and whose sole occupation is to sit at his window and watch everyone and everything outside. It becomes clear, from what the old man says, that Lognon had persuaded the young woman to allow him to use her apartment to observe what was going on in the large and very expensive house opposite. It is owned by a famous Dutch art critic name Norris Jonker and, from what Maclet says, it appears that his house is frequently visited by prostitutes.

With little progress being made in the search for the missing girl, whose name is Marinette Augier, Maigret decides to follow up himself on a visit already made to Jonker's house by an inspector from the 18th arrondissement.

There are, of course, many examples of Maigret's interview technique in the novels in which he features but the one he has with Jonker (and his wife) is memorable. Maigret is by no means convinced that interviewing them will lead anywhere but he has a feeling that they may be important to the case – a feeling for which he can't account but which will not go away. Initially, therefore, he says that his calling on them is simply a matter of routine, though, as the interview progresses, he doesn't hesitate to point out that he could insist on their attending for a formal interview at the Quai des Orfèvres. He uses the same technique to persuade them to let him search the house, although they are clearly reluctant to allow it.

Jonker is a well-known and respected figure in the field of art and his wife is a very wealthy woman. Although apparently very affable, both give the impression that they are simply doing Maigret a favour in answering his questions. However, they become more guarded and even defensive in what they say, causing Maigret to conclude that his instinct is correct. The questioning takes a long time but it is so cleverly written that that the reader becomes absorbed.

Towards the end further characters are introduced and the plot becomes a little involved.  Nevertheless, it hangs together very well as the detective once again concludes a successful investigation.