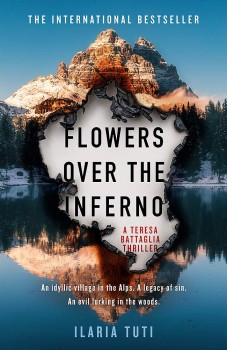 Flowers Over the Inferno

A disfigured body is found in the mountains near a remote village in Northern Italy, close to the Austrian border.  Police superintendent Teresa Battaglia must break through the closed and secretive nature of the local villagers.

Young police inspector Massimo Marini is sent to join the team of police superintendent Teresa Battaglia. As soon as he joins them, he realises he is going to be constantly challenged by this unique woman detective. The case they are investigating is that of a murder in which the face of the victim has been badly disfigured.

The team are assembled in the woods close to a remote village in the mountains of northern Italy. They discover that the villagers are very private and protective of each other. On the other side of the border in Austria there is an old orphanage where, in the past, there were suspicions that things were not quite right. Marini soon understands that he has to read and learn if he is to be of any help to Teresa.

Teresa herself is conscious of getting older and is struggling with her diabetes but she has great skill in profiling. Consequently, when other murders begin to happen, she realises that they may be looking for a serial killer. As the novel progresses her character is written in more and more depth. Her understanding of people’s emotional state is written in a way that is more and more affecting for the reader, particularly in the scenes in which young children are involved. The slowly developing working understanding between Teresa and Marini is sensitively written too, leaving the reader to interpret the many hidden signs.

The context feels very real: the hidden mountain valleys that become cut off from the world in winter; when everything is damp and cold and people don’t leave their houses unless absolutely necessary; the encroaching developments of new ski facilities, threatening the centuries old practices of the villages; the natural tendency not to share any information with strangers. All these things make it very easy for someone intent on harm to function with impunity. But of course, children are not necessarily affected in the same way as adults.  They can invent different ways to function in such circumstances.

This is the first book by Ilaria Tuti to be released on the British market. The first few chapters are used to introduce the various strands of the story, but very soon it all coalesces into a straightforward and tense investigation. It is beautifully written and well translated, apart from the very occasional word which sounds the same but means something different. The pace is just right, and at the end it could be difficult for the reader not to want to read the epilogue and the author’s notes, which is always a sign of an enjoyable read.