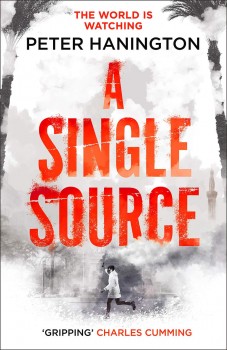 This is not so much a novel as contemporary history thinly disguised in literary form – and apart from being totally gripping, is an absolute must read for anyone with the slightest interest in events which still resonate in a key part of the world.

For his second book – his debut A Dying Breed dealt with Afghanistan – veteran BBC radio newsman Peter Hanington has chosen the Arab Spring, that explosion of revolt against oppressive regimes, coupled with demands for greater democracy and an improvement in often dismally low living standards, which shook the Middle East from its birth in Tunisia in 2010. Countries from Algeria to Sudan were rocked and de-stabilised by an outpouring of popular feeling. Some, such as the Yemen, Syria and Libya, descended into bitter and continuing civil wars.

At the heart of Hanington’s story is Egypt, at near 100 million the most heavily populated, most powerful and most key country in its alliance with Western democracies, and ruled since the abdication in 1952 of the lazy, capricious, irresponsible and vain playboy King Farouk by successive oppressive military dictatorships.

As dramatic protests spread across North Africa and the Middle East, led by a new generation of tech-savvy youngsters challenging the old order, news media, including the BBC, gave it mass coverage. In doing so, they ignored the growing flood of economic, religious and political refugees fleeing almost every sub-Saharan state in a bid to find new lives in Europe.

Hanington uses this book to combine both. Parallel stories, which over a few tumultuous months prove inextricably linked, tell of the world-changing events as protests spread, joined with that of two Eritrean brothers, desperate enough to risk everything to cross a continent for the chance of a better life.

It’s topical, authoritative and gripping, tight-paced and strong on atmosphere, full of vivid characters and so clearly mined from Hanington’s own experiences as to make it feel totally authentic. The initiated may pose nods to le Carré, Greene and Ambler, but this impressive and atmospheric story, punctuated with interludes of hilarious dialogue, does entirely its own thing – and is far the stronger for it.

As in his debut, the story’s anti-hero is hard-bitten radio reporter William Carver, an ageing, classically curmudgeonly Lunchtime O’Booze figure, who could not possibly survive in ‘Auntie’s’ present bland climate. But he is there. together with his well-meaning and smart young producer. They know the world is watching, but its attention span is becoming increasingly short in an age of Facebook, Twitter and rolling news.

Events convince Carver there is a second, more significant and potentially more dangerous story behind the marches and the camps in Cairo’s Tahrir Square, and if no one else is willing to tell it, he will – whatever the consequences to his career or even life.

Hanington has that rare ability for telling the stories of the lives behind the headlines in a way that invites the reader to care about his characters. This both exciting and entertaining work again raises issues about political and commercial interference in almost every part of government policy and life itself.

His characters’ conflicting motivations – including an early flash of Muslim extremism – are all well-rounded and in places, this fast-moving tale of shifting loyalties and betrayal is downright vivid in its brutality.

There have been many books about journalism in war or near war zones. But this tale of investigative reporting, shady deals, intelligence men and conflicted diplomats, is another absolutely outstanding addition from an author who spins an almost Kipling-esque story with insight, humanity, humour and, at times, near fury.