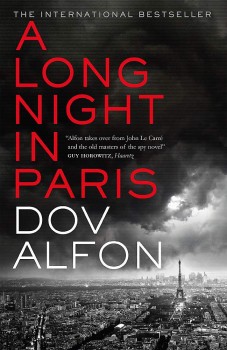 A Long Night in Paris

The disappearance of an Israeli man shortly after arriving at Paris Charles de Gaulle is only the first challenge for Commissaire Leger in what proves to be a very long night.

A Long Night in Paris is a brilliant foray into the world of covert operations, shining an excoriating spotlight on security services and the hidden hand of government. An entirely believable information leak initiates violent attempts at retrieval, while the officials do their best to spin the news for the public, while taking maximum advantage, very much in the tradition of The Thick of It.

A man visiting Paris for a tech conference passes through the airport arrivals barrier to be met by an attractive woman wearing hotel uniform, leaves with her and then apparently disappears. That the French police take an early interest is down to the involvement of Colonel Zeev Abadi, the new head of Unit 8200, a special unit within Israeli intelligence, who happens to have arrived on the same El Al flight.

The fortuitous discovery of an illegal CCTV set up in an inactive part of the airport soon answers the question of what happened to the missing man, but the question of why remains obscure. Abadi demands details of other passengers on the flight and with the help of his unit back in Tel Aviv soon identifies another person who might have been the real target of the abduction.

Luckily back in Israel he has Segen (Lieutenant) Oriana Talmor, a quick-thinking woman who can both assemble the necessary resources effectively to support her superior in Paris, whilst managing to keep at bay other elements of Israeli security forces, which are either desperate to ensure they are not sidelined, or wilfully obstructive.

Commissaire Leger of the Paris police has trouble keeping abreast of rapid developments in the case when a second abduction is recorded on camera, and two Chinese men are killed by advanced weaponised drones. The quick-thinking Abadi is, however, ahead of the game, and Talmor is summoned from Israel to resolve the matter. The two make a formidable team, but their opponents are well-resourced and entirely ruthless.

This excellent tale begins at a ferocious pace which continues throughout, slowly revealing details of the principals behind the conflict to keep the reader guessing until the final pages. The protagonists Abadi and Talmor are fighting bureaucratic obstruction and self-interest as much as their opponents, and their clever ducking and weaving is a joy. Enough is revealed about their background to substantiate the characters of the two, both combative and fiercely intelligent.

Interweaved with the adventure is the totally credible and often hilarious picture of security organisations, airport officials, PR gurus all determinedly passing the ‘hot potato’ and doing their best to undermine competitors and make capital out of any event, regardless of any national or humanitarian interests involved. You don’t often find a spy novel with so many laugh out-loud moments.