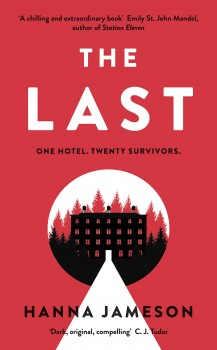 A group of people are holed up in a Swiss hotel when the world as they know it ends.  Historian Jon Keller provides a chronicle of events that unfold in the aftermath of the disaster.

Can you imagine learning about the end of the world on social media? I can, all too vividly, which is no doubt why I fell hard for The Last by Hannah Jameson.

Imagine you’re in a hotel in a forest in Switzerland for a conference. You come down for breakfast as usual, and then people start screaming. That’s not a usual reaction from looking at your mobile phone, so Jon Keller, an American historian, knows immediately that something is badly wrong. That something turns out to be news of multiple nuclear strikes against the United States.

Bad news travels fast and social media is soon full of people who seem to want to spend their last minutes on earth getting a selfie of themselves against the backdrop of a mushroom cloud of nuclear fallout. Sounds far-fetched? Not to me, and not in the current political climate. I’ve thought for the last couple of years that a nuclear strike could easily be announced on Twitter. It’s certainly been threatened on there.

Many of the hotel guests immediately make a dash for the nearest airport, despite announcements that all planes have been grounded. For Jon, the end of the world is all a bit of a blur. He tries desperately to contact his wife in the US, but doesn’t succeed, and smashes his phone in the panicked chaos that follows. But he doesn’t follow the exodus from the hotel, choosing instead to stay put.

The number of those who opt to remain gets smaller by the day, as people decide to end it all, some by hanging, some by jumping out of windows and one woman by jumping down the stairwell in the hotel clutching her baby. She died. The baby survived. Imagine, if you can, being in that much despair.

The picture Jameson paints is an unvarnished look at the aftermath of a major disaster. Some people will behave well, some people will behave badly, some people will surprise themselves in all sorts of ways. And amongst the loss of millions of lives, one life can still matter, as Jon finds out when he discovers the body of a child hidden in one of the water tanks on the roof of the hotel. That death matters to Jon, and he wants to find out what happened to the girl and why.

Amidst the big picture that Jameson depicts so vividly, she contrives to make that one small death central to Jon’s story, as he doggedly follows every line of enquiry he can, even when it starts to make him look unhinged to his fellow survivors.

The book is told by Jon to the reader as a form of memoir, each day numbered from the day the world as he previously knew it ended. This is interspersed with some flashbacks and digressions. As the narrative progressed, I couldn’t quite lose the feeling that there was an element of unreliable narrator involved, which is only natural in such an intensely personal story, but I certainly didn’t guess how things would play out, or exactly what it was that Jon was concealing, although the hints gradually became clearer so that the story gradually unfolded without any big ‘talk about the plot’ moments.

Jameson handles a large cast adroitly and I got to know them as gradually as Jon did. There’s Dylan, the quiet, competent head of security, who emerges as the group’s natural leader; Nathan, the laid-back barman; Tomi, confident, acerbic and quite capable of using a gun; Tania, the only doctor in the group, who’s able to carry out a makeshift post-mortem on the dead child without throwing up. Each one of the characters gradually emerges from the wreckage of a world with personalities of their own. They all matter, and Jameson is very good at making every loss count.

It’s no secret that I absolutely love post-disaster books and TV series/films, from Day of the Triffids to both versions of the TV classic Survivors, and all points in between. I adored Simon Scarrow’s Last Light series and am a complete sucker for anything involving meteors on collision course with earth. But most of all, The Last reminded me of the little-known 1970s classic, Malevil by Robert Merle, which depicts a small community desperate to stay alive in the old French chateau that has shielded them from the effects of a ‘clean’ bomb. I read the book when it first came out, and it has stayed with me, still vivid after 40 years, even on only one reading. The Last is out of the same stable, and it’s a book that I’ll very happily come back to in the future.