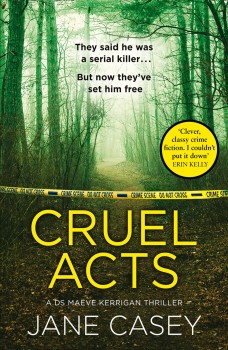 When convicted murderer Leo Stone is allowed out of prison on licence while awaiting a fresh trial, another young woman disappears, leaving the finger of suspicion to point at him.

Convicted murderer Leo Stone is released from prison after the original verdict is quashed following the release of a self-published book by one of the jurors. The book made it clear that some of the jury had disregarded the judge’s instructions and had done their own internet research that had led them to their guilty verdict. There are also fears that the pathologist who worked on Stone’s case and others had made mistakes as he continued to work, even after a diagnosis of terminal cancer

DS Maeve Kerrigan and her boss DI Josh Derwent are tasked with re-examining the case against Stone and making sure that it is bombproof by the time it comes in front of a new jury. When Stone requests a meeting with Maeve, Derwent is against it, but she accedes to the request, hoping to learn more about the man and his motivations. The families of his two victims, Sarah Grey and Willa Howard, are divided. The Greys believe that Stone is innocent and have campaigned for his release. The Howards are implacable in their hatred of the man they believe killed their daughter.

Maeve finds Stone repellent, but she’s not convinced of his guilt. She also believes that a third missing woman is connected with Stone and wants to look into the disappearance of Rachel Healy. Her bosses think otherwise, and Maeve is ordered to concentrate on the main case against Stone. But when she makes an error of professional judgment and is relegated to the sidelines, Maeve is free to look into Rachel’s death in more detail.

As ever, the relationship between Maeve and the acerbic, interfering, frequently over-bearing Derwent is at the heart of this brilliant, twisted police procedural that burrows deep into the psyche of the unpleasant Stone and the apparent connections to his victims. The sniping between Maeve and Derwent plumbs some entertaining new depths, but as ever, Derwent rushes to help Maeve almost as fast as he delivers his memorable put-downs, making it clear that for all the macho bluster, he does care for her. His softer side is also evidenced by the way he forms quick and easy connections to the victims’ families and friends.

The rest of the police cast make strong appearances: tough, blunt DCI Una Burt, smarmy Superintendent Charles Godley, supportive Liv and ambitious, self-serving Georgia who has her sights fixed on Maeve’s place in the team. These characters provide the solid police background that underpins all the Maeve Kerrigan books. Despite being part of a now long-running series, Cold Case can easily be read as a standalone as Jane Casey has a light hand when it comes to filling in backstory and drip-feeds just enough to make sense of Maeve’s hang-ups about her former boyfriend, Rob, also a police officer.

Casey’s characters always ring true and there’s plenty to like in this latest offering in a series that deserves all the attention it gets. The plot is twisty but never impenetrable, and the characters and their complex inter-personal relationships weave a rich backdrop against which suspicion flourishes like a patch of petals. I would love to see Maeve and Derwent come to life on the small screen – just as long as I’m allowed to have a hand in the casting of one of the genre’s best bad boys. Cruel Acts is a masterclass in how to write a thoroughly engaging police procedural that ticks all the necessary boxes in what at times seems like an over-crowded crime scene.