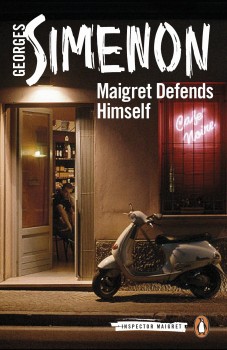 When Maigret receives a formal notification to attend an interview with the Prefect of Police, he is alarmed. He is even more so when it turns out that he has been accused of assaulting an 18-year-old girl, whose father has important political connections.

One evening Dr Pardon, with whom Maigret and his wife are dining, asks a question that very soon comes to haunt Maigret. He wants to know if he has ever encountered a purely evil person, one who had committed a crime for which no possible justification could exist.  Maigret thinks of the number of people he has interrogated who appeared, at first sight, to fit the definition, but for whom, as it later turned out, there was at least some excuse. It is a conversation he is to remember a few days later.

This is an unusual Maigret novel because in a very real sense the detective himself is on trial, if not for his freedom then at least for his career. He is 'invited' to see the Prefect of Police – an invitation that causes his cheeks to turn red, as they did whenever he was called to the headmaster's office as a schoolboy. He learns that 18-year-old Nicole Prieure, whose father has important political connections, has accused him of having assaulted her in a hotel bedroom.

Maigret admits that he had been with the girl, that she had telephoned him asking for his help and that he had gone to meet her. The remainder of her story, he says, is a pack of lies. Clearly the Prefect does not want to believe what Maigret tells him and suggests that he should consider early retirement – something the detective is determined not to do, as it would be an admission of guilt. The Prefect says he will let Maigret have the girl's statement when it is typed up and asks him to prepare his own statement of exactly what occurred. The Prefect is smiling as Maigret leaves, clearly enjoying his discomfiture.

The detective spends a long time reading through the girl's statement and is initially puzzled. Apart from the fact that he met her, as she asked, there is scarcely a word of truth in what she claims happened. Suddenly he remembers the question Dr Pardon had put to him and it occurs to him that – perhaps for the very first time – he is confronted by pure evil. He cannot believe that the girl has made up the story herself and has to conclude that somebody has invented it for her and persuaded her to act a part. Even before he has established any facts his instinct has led him to look in the right direction.

Maigret regards the case – it has now become another case for him – as a personal one in which he cannot involve his inspectors. He has, however, to start somewhere and decides to visit the places he had been with the girl on the previous evening. The answer, however, is always the same. Nobody can remember anything and it becomes clear that they have been either bribed or threatened to ensure their silence, confirming Maigret's theory that the whole thing has been deliberately planned.

Whilst Maigret's mind is as fertile as ever, it has to be admitted that there is a certain amount of luck in the solution to his own case. He is convinced – and Simenon would have agreed – that the answer to Dr Pardon's question is that there is no such thing as the innately wicked criminal.