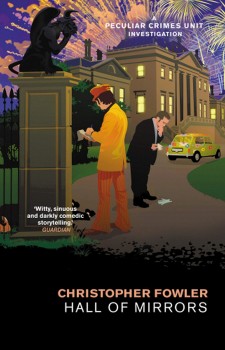 A London building boss is due to appear in court and a rival is due to testify against him. A young Bryant and May are detailed to make sure he does. But then he decides to attend a house party in a country mansion, which is where it all goes very wrong.

The collapse of part of a building appears to have caused the deaths of a young family in 1960s London. The builder is due to appear in court and a rival is to testify against him. As young police detectives Bryant and May are already in trouble with their boss in the Peculiar Crimes Unit (PCU), and after a particularly difficult time they are temporarily transferred to a different boss. They are given the task of looking after the witness for a weekend to ensure that he appears in court on the Monday morning.

However, the witness is certain that someone is out to harm him and he decides to go to the country house of a friend for a weekend party. Bryant and May have no choice but to go with him.

For prior readers of the series, it is interesting to see these two unorthodox detectives as young men. It is evident from the start that May is the most conformist of the two, but it is Bryant who evidently has the flair for solving crimes, provided he can stay focussed.

Whilst many of his actions can appear quite bizarre, it is evident that he is very intelligent and very knowledgeable. Although he tends to find it difficult to interact with other people unless he already knows them well, he is often intuitively aware of their motives, particularly when they are being anything but honest and straightforward. Bryant and May at this stage in their careers are already developing a way of complementing each other in their partnership. Both characters are written with so much depth.

The author, as always, appears to be very interested and knowledgeable in history, particularly in that of London and its immediate surrounds, which is one of the many reasons why this series is so good to read. The reader can always learn something new, in this case about the history of London in the 1960s. But it’s not the usual popular culture, but rather a sideways glance at some of the underlying social issues.

The main part of the novel is set in a large manor house in the countryside outside London. The author captures perfectly the way in which in the 1960s, various very different cultures existed side by side. The hippy culture, the country house culture and the post-war building boom all made for unhappy bed-fellows. The owners of the manor house are already finding the upkeep almost impossible to manage and when a buyer comes along they are naturally interested.

The introduction of army exercises nearby, a couple of murders and a collection of decidedly odd guests make it a very interesting but rocky weekend, with Bryant and May struggling hard to keep their witness safe and under control. Hall of Mirrors is a very worthwhile, funny and enjoyable read.