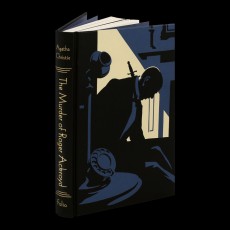 The Murder of Roger Ackroyd

The famous detective Hercule Poirot retires anonymously to the quiet village of King’s Abbot, but when his friend Roger Ackroyd is murdered, he is persuaded to take up one last case.

In this, Agatha Christie’s well-known Poirot novel, first published in 1926, the great detective has retired to King’s Abbot, the home of an old friend of his, the wealthy Roger Ackroyd. Poirot is living anonymously, growing vegetables and enjoying the quiet life, when Ackroyd is murdered.

Despite keeping his past career secret since his move, the detective is outed by his next-door neighbour Flora Shepherd, who is living with her brother James, the village doctor. James was at Ackroyd’s house the night of the murder, and over the course of the investigation he steps in as Poirot’s sidekick; Hastings is out of the picture, having married and settled in the Argentine.

The narrative is told from the doctor’s point of view as he documents the investigation, the sparks of genius from Poirot and his own bemusement at the seemingly random connections made by those famous ‘little grey cells’. As Hastings did before him, he gives insight into the workings of the detective’s analytical mind, as well as throwing light on the nuances of the suspects. While Poirot sees them simply as pieces of the puzzle, the doctor shines a light on them as people who are as flawed as they are good.

Between the murder and the big reveal, the plot contains Christie’s signature twists and turns. There are red herrings aplenty and many different interpretations of the facts presented, depending on who is doing the theorising. But this book is famous for its unusual, and at the time innovative, ending – the introduction of an unreliable narrator. It’s the kind of book you want to immediately go back and read again once the killer has been revealed, to see if the clues do in fact fit the revelation.

Christie’s novels are timeless, satisfying our thirst for a good whodunit as successfully now as they did on first publication. Her ability to write multi-dimensional characters and twisting plots captures the imaginations of generation after generation. This book, in particular, is a real treat for fans of the genre. Although I’ll admit that once the possibility of the killer’s identity popped into my head, around halfway through, I couldn’t shake it and the evidence seemed to stack up even as I questioned it with every turn of the page.

This new release of Agatha Christie’s third Poirot book, voted by the British Crime Writers Association in 2013 as the best novel ever written, comes beautifully bound, in a slip case, with all new illustrations by Andrew Davidson and an introduction by Sophie Hannah.