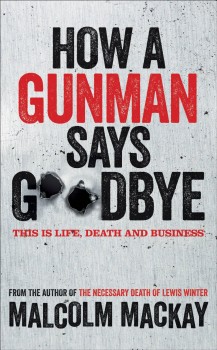 How a Gunman Says Goodbye

Hitman Frank McLeod has a problem. After decades at the top of his profession he has bodged a job – and had to be rescued by the young killer he recruited. What does a gunman do in retirement? Can he quit or is he a danger to himself and his former bosses?

Ageing hitman Frank MacLeod’s long-term options have suddenly become terminally limited. He is back at work after a hip replacement operation, has botched his first job and had to be rescued, and Malcolm Mackay cleverly blends moments of near-compassion with the reality of Frank’s diminished usefulness to his former masters. The pace of the action slows as he faces the realisation that his options are decreasing and his future bleak. After all, how does a professional killer retire?

This fascinating and cleverly written book may be the second of a trilogy, but can equally be read as a stand-alone. It is probably the better of the two, brilliantly developing many of the earlier characters. You can’t hate them despite what they do. It’s just a job – a role in a criminal organisation with its own hierarchy and rules – rules which will keep you alive.

The control of this writing, so illustrative of Mackay's obvious love of, and homage to, the hardboiled tradition of American crime fiction is a joy, setting him largely apart from his other Scottish crime contemporaries, and highlighting once again the marked difference and freshness he brings to the genre.

Another interesting curve to the story is that we see an interesting reflection of Frank's potential fate, within his erstwhile protege Calum MacLean (the focal character of the previous book), a relatively young man, who carries the uncomfortable knowledge that Frank's life casts an unwelcome shadow on his own future, alienated from personal human relationships with a powerful sense of the clock ticking down on his long term usefulness in his chosen profession as a killer for hire. As Frank's power and position diminishes, Calum's star rises, but at what cost to old and young man alike, and is this the life that Calum really wants to maintain? After his crisis of conscience following his killing of Lewis Winter in the first book, MacLean is once again grappling with weighty issues, and Mackay's use of the stream of consciousness both in relation to Frank and Calum is rhythmical and mesmeric adding a pulse to the narrative, as they, and by extension the reader, come to realise the futility of their musings.

Mackay has once again brought us a brutal and dispassionate tale of the Glasgow underworld, but so cleverly undercut with moments of extreme poignancy that resonate with the reader on a very human level. A crime novel that is spare but emotive, beautifully constructed with an unrelenting tense pace, and compelling to the very end, thanks in no small part to the exceptional characterisation and Mackay's ability to depict the violent underbelly of gangland Glasgow. A remarkable read.Calum, the young killer and Frank’s natural replacement, is still completely believable, caught between the violent crime world and trying to live a normal life; DI Michael Fisher is still desperately casting around and willing to go to any lengths for a means to crack the wall around the gangs; aspiring overlord Jamieson and his consiglieri and fixer Young are just as corporate, smooth and deadly. The smaller players know their place in the scheme of things and operate accordingly.

This second instalment of Mackay's Glasgow trilogy after The Necessary Death of Lewis Winter marks him as a bright new name in Scottish noir. How a Gunman Says Goodbye is another uncompromising, compelling and mesmerisingly cool, almost corporate speak, description of an underworld run like rival companies – except people kill or mutilate each other.  The pace is fast enough to build and maintain tension. Spare, often urgent, prose, and some deliberately skimpy characterisation emphasise this. It’s difficult to care about any of the characters and if you want a book to touch your soul, this isn’t it. This is just business – a business based on violence and misery.

If there is to be any criticism it must be that neither of the books has a real sense of place. What they are – and this second even more than Mackay’s debut – are chillingly unnerving descriptions of the world of organised crime.