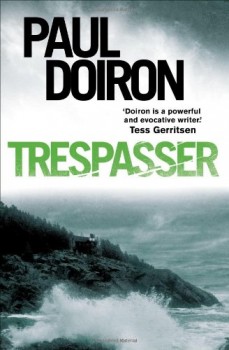 Game warden Mike Bowditch, sent to a collision between a car and a deer on a lonely road, is surprised when he finds the car and blood on the road, but at first, no driver and no deer. When the woman is later found dead, things get dangerous for Bowditch.

When I reviewed game warden Mike Bowditch’s debut in The Poacher's Son last year, I suggested readers remember the author’s name. Well, Paul Doiron has done it again. Largely absent this time are the brilliantly evocative descriptions of Maine’s shrinking wilderness which made his debut so stunning, but this is still a compelling and cleverly crafted murder mystery.

Bowditch is a complicated character, self-doubting, hot-tempered, committed to his job and single-minded to the extent of risking his career, happiness and even his life in his pursuit of justice – a sort of Dirty Harry of the woods without Inspector Callaghan’s all too obvious flaws.

When Bowditch attends a collision between a car and a deer on a lonely snow-covered road, he is surprised to find the car, blood, but no driver and no deer. Later he discovers the young woman driver brutalised and dead in the beachside home of her missing employer. The manner of her killing is similar to an infamous earlier murder for which a local man is now serving life, but when Bowditch makes the connection he is quickly warned off the case by state authorities. Suspecting a possible cover-up, he launches a clandestine investigation, risking his career and his rebuilt, but shaky, relationship with his girlfriend and unwittingly putting both their lives in danger.

The plot is filled with startling twists and turns. Its main characters – some of whom, such as Bowditch’s warden colleagues and a cynical detective, make a reappearance – are lovable, or considerably less so, but without fail, well rounded and multi-dimensional. Doiron’s always stylish prose has matured – his description of a quadbike chase through the forest is a masterpiece of dramatic narrative, and his use of Maine’s ‘mud season’ of early spring with new life emerging from the snow and slush is an effective metaphor for Bowden’s internal struggle for stability and progress.

Part of the inspiration for this story apparently came from a bitterly-disputed real life homicide conviction, but above all it is local magazine editor and registered guide Doiron’s sense of place and of the people of rural Maine – a society split between often near-impoverished locals and affluent holiday visitors – their lives and problems, which brings reality and nuance to this well-paced and constructed read which saw the author a finalist for both the Edgar and Anthony awards and more than lives up to the promise of his debut.