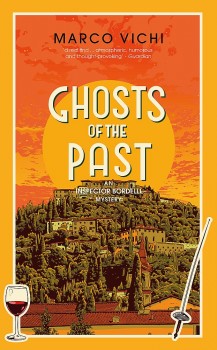 A well-respected Florence citizen is found murdered in his study.  Apart from a fencing foil stuck between his ribs, there are no clues, no fingerprints, nothing except for a beautiful ring found close to the body.

Inspector Bordelli is still living in the old farmhouse in the countryside outside Florence, still enjoying the peaceful, rural life in the woods of Imprunetana. However, he is now back at work and is called to investigate an unusual murder.

When Bordelli arrives at the scene he finds a wealthy, well-respected retired man lying on the floor of his own study with a fencing foil between his ribs. There are no fingerprints, no clues at all except for an open window and a beautiful ring on the carpet.

Bordelli is a man approaching retirement who thinks a lot about life. He spends a lot of time making contact with people, initially with people who might shed light on the murder case, but also with his former neighbours from when he lived previously in the city, and with his many friends. Food is also an important aspect of his life, as is reading and walking in the woods around the house where he lives. When he has exhausted all possible ideas of how to solve the murder, he focuses on these other things.

One day he recognises an old acquaintance, down on his luck, on the streets of Florence. Bordelli invites him to stay with him. The descriptions of the two of them eating together, going on long walks, reading their books, drinking wine and talking about everything under the sun are beautifully written. The atmosphere of these two men just relaxing and enjoying each other’s company can almost be felt. The characters have such depth.

Although the original crime permeates the book, it often takes a back seat. Throughout the book there is a multitude of mini stories. For example, when Brunetti has all of his male friends round to the farmhouse for a meal, the tradition is that each friend tells a story. Similarly when Brunetti and his guest, a retired intelligence officer, go for walks or sit over their wine in the evening they are constantly telling each other stories from their respective pasts. These mini-stories permeate the novel and yet, very cleverly, do not affect the flow of the original investigation.

Interspersed with all this are Bordelli’s various assignations with women friends in Florence. He is written as a very thoughtful and likeable man, generally fond of women but sometimes being just a bit too sensitive about his advancing years. His ongoing love for a previous girlfriend, Eleanor, continues apace throughout the book. He also thinks frequently of his late mother, especially when he is trying to get to sleep. To help him he often reads lines of her poetry, recently re-discovered among his belongings.

Despite all the reminiscences, Bordelli always has something to do or someone to talk to, or somewhere to go. All this also maintains the pace very effectively. The overall effect of the novel is of a warm, comfortable, interesting and informative read.