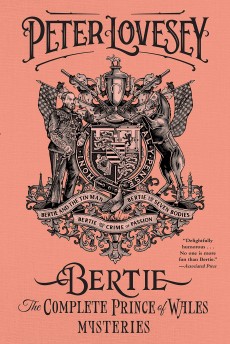 Albert Edward, Prince of Wales, the future King Edward VII, is a pleasure seeker, searching out the best meals, the most beautiful women, and the most lavish parties. He also fancies himself as an amateur detective and relates his ventures into crime.

Bertie – Albert Edward, Prince of Wales, the eldest son of Queen Victoria and future King Edward VII – was originally a one-off in Bertie and the Tin Man, sparked by Lovesey’s own interest in the suicide of Fred Archer, the greatest jockey of the 19th century and considered by many experts the greatest of all time, who after riding 2,700 winner including several for the Prince, shot himself at the age of 29 after posing the enigmatic question: ‘Are they coming?’

Lovesey turned to Agatha Christie for inspiration. Her country house mysteries – the Prince was addicted to lavish and often morally relaxed affairs at the homes of his friends – and love of titles featuring lines from nursery rhymes, sparked the second of Bertie’s adventures.

His third originated in the portly Prince’s love of all things French, its food, its sometimes outrageous music hall’ and most particularly its women! To be fair, one of the few real successes of the gaffe and scandal-prone Bertie’s pre-coronation life was his enormous personal contribution to what became the entente cordiale to counter the threat of Germany’s imperialism. Bertie and the Crime of Passion could only be set in Paris and revolves around a killing in the notorious Moulin Rouge cabaret bar.

Now, all three of his improbable feats of detection are contained in one heavyweight volume and for those who enjoy factually-based historical mysteries with a healthy helping of humour are an absolute must! These self-narrated stories focus entirely of Bertie’s opinion of himself as pleasure seeker, bon viveur, star of the most lavish parties – and a sleuth to rival Holmes or Poirot!

They are totally and vividly of their time, aided by the appearance of most of his circle of wealthy and aristocratic friends, his long-suffering, but far from unaware or unintelligent wife, Princess Alexandra of Denmark, several of his love interests including the great actress Sarah Bernhardt and a supporting cast of lesser, but nevertheless important real characters including the artist Toulouse-Lautrec, whose work fails to meet with the Prince’s approval!

Lovesey’s sparkling writing, masterful plotting and laugh out loud hilarity offers a sometimes  rueful, always candid, voice to his portly hero-narrator which rings surprisingly true. His sometimes pompous Prince displays a charmingly invincible obtuseness, his unwillingness to behave like a ‘proper’ royal, his candidly expressed wish to offer the reader insights into his writing and thought processes without ever spoiling any surprise or detracting from his sleuthing abilities is almost touching.

The future King Edward was better known for his indulgence than intelligence, but his dubious skill at detecting, if Bertie is to be believed, will keep you glued to the 600-plus pages – and you can even add to your culinary knowledge by discovering the origin of the crepe suzette and his Royal Highness’ part in it!