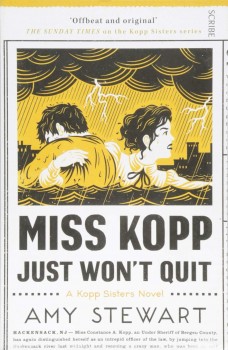 Intrepid Deputy Sheriff Constance Kopp’s help for a woman inmate in a mental home sees her targeted as a political football in a key election.

The intrepid and inimitable Constance Kopp, America’s first female deputy sheriff, is back in another episode of Amy Stewart’s superbly conjured rendition of the small town of Hackensack, New Jersey, in the run-up to the First World War.

Based on true characters and events, the 6ft Austrian-American makes a fierce and lively heroine as she expounds her case for sexual equality. She may be turning 40, but this tough-minded, generous-hearted believer in second chances and equal rights is an absolute stand-out in the strong female lead character side of the genre.

In 1916, a high-stakes US election year, the country is poised on the brink of involvement in the two-year long European war which has devastated France and Belgium, the Middle East and parts of Russia and Eastern Europe.

Stewart uses Constance’s blend of practicality, forthrightness and compassion in her first-person narration as she builds a fast-moving, suspenseful story with a deep emphasis on character, politics and social issues.

With America gripped by spy hysteria and riven by the emerging unions flexing their muscles with a series of strikes, Constance, already the target of a powerful body who don’t believe women belong on the police force, and her Germanic-sounding name making her a natural target of political attacks for those determined that Sheriff Heath, running for Congress as a Democrat, is not succeeded by another liberal.

There is an uncomfortable contemporary resonance, as Constance, already under scrutiny and in a precarious position, jumps into a river at night to save a mentally disturbed prisoner who escaped from another officer.

When she discovers that a woman she was escorting to the local mental asylum at the time of the incident is regularly put into care by her husband on the say-so of a doctor who has not seen her, she begins a private investigation which both risks her job and the Sheriff’s political future.

This series is a terrific historical venture, founded in fact and highly engaging without ever attempting to sanitise the attitudes of the times. Stewart utilises plenty of wit and verve, truculent and vividly imagined characters and intrigue to offer her own interpretation of the real Constance Kopp and her feisty sisters.

It gives the reader a flavour of life for New Jersey women in the early 1900s, backed by excerpts from newspaper stories of the time, which makes Stewart’s stories even more believable.

She captures the sexism and pomposity of some of her characters beautifully, particularly Detective John Courter of the Prosecutor’s Office, and weaves together the numerous and distinct threads to produce a realistic and memorable story of what was a particularly dirty national and local political campaign.