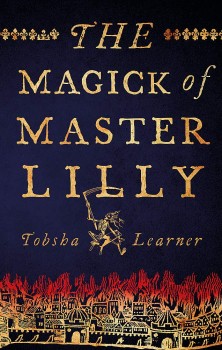 The Magick of Master Lilly

Master 17th century astrologer and magician William Lilly narrates the story of an England broken by religious and political intolerance as it plunges towards civil war.

Learner draws on the traditions of almost every known religion from the most ancient times to illustrate the theory of knowledge, especially with regard to its methods, validity and scope, drawing the distinction between justified belief and opinion, to explain Lilly’s complex social, legal and political philosophy, as well as his abiding interest in the metaphysical.

If that’s not enough to put you off, you are in for a compulsive and fascinating read, matching the history of the narrator’s turbulent times – eight years which saw England at war with itself and the execution of a king – with a beautifully told and compelling tragic love story.

In 1641 England is divided. London is riddled with spies as the growing influence of the Puritans and general dislike of Charles I’s extravagance and the influence of his dominant French Catholic Queen-Consort Henrietta Marie – she could never be Queen because of her refusal to accept a Church of England coronation – splits the nation into what were to become Roundhead and Cavalier factions.

Former Master Astrologer Lilly is living in exile in the Surrey countryside, since rumours of occult practice lost him the favour of Parliament. Summonsed back to London by the Queen to read the fate of her husband, what he sees in the stars will change the course of history and influence far greater destinies than his own. He also meets the love of his life, the beautiful, fascinating and committed Royalist, Magdalene de Morriset, who is also interested in the occult.

Against the backdrop of their fictional, passionate and moving love story, Learner has spun an epic historical thriller, evoking the fear-ridden atmosphere as both Royalists and Roundheads rape, burn, torture and steal, and spies abound, which also stimulates the reader’s emotions with the smells, sounds and images of a 17th century England divided by bloody religious and political struggle.

Learner has painstakingly researched the historical facts and personages, while her fictitious characters and events blend perfectly into the background. Lilly’s predictions, healing skills, his weaknesses and strengths, compassion and passions, and adroit survival tactics as he is forced to walk a tightrope between warring sides ensuring allies in both camps, are brilliantly portrayed.

There may be critics who will dispute Learner’s interpretation, but this is an important novel which has much to say about destiny versus free will and what happens in a society where those in power are blind to the effects of their actions. It also explores the impact of the war on all walks of life – and the rise of the amoral, ambitious shipping clerk Matthew Hopkins to the extremist Witchfinder General, with his torture and burnings of hundreds of the ‘Cunning Folk’, often country midwives and herbalists, bears an uncomfortable resemblance to the modern world with its Gestapo, other repressive secret police forces and now the fanatics of the IS.

Epic is an overused word, but this brilliant, moving and totally compelling story truly deserves that description!