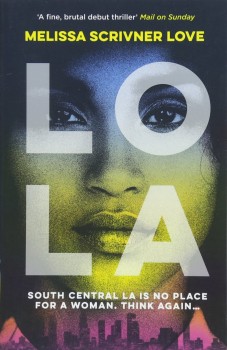 The Crenshaw Six are a minnow amongst the gangs of South Central LA, and war between rival drug cartels provides both an opportunity and a threat. Luckily, they have a smart leader.

The Crenshaw gang live by the traffic of narcotics in Huntington Park, a ghetto suburb of Los Angeles just east of South Central. Their neighbours think the gang is headed by Garcia, but in truth operations are directed by Garcia’s girlfriend Lola, a woman who negotiates several challenges to ensure the people she loves live a bit longer.

As the book opens, the gang receive a visit from a man known as El Coleccionista, the Collector, on behalf of Los Liones, a Mexican drug cartel. Los Liones have received word that one of their distributors is doing business with a competitor, and that an exchange of drugs for $2 million in cash is to take place the following night. They want the gang to interrupt the transaction and take possession of both drugs and cash.

The instruction offers the opportunity of immediate reward and a long-term lucrative relationship, but penalties in the event of failure. Unfortunately, despite Lola’s meticulous planning, things do not go smoothly. Los Liones demand both the drugs and cash within a few days, failing which Lola’s life will be forfeit.

Lola cannot afford to panic as she needs to locate the missing items. The bag supposed to be full of cash at the drop held merely paper, so either the distributor Darrel King or his courier Mila still have the money. The drugs have disappeared, but Lola finds a drug squad officer at the scene when Mila’s body is discovered and suspects he might know something.

Despite Lola’s existential need to solve the case, she manages to control her anxiety and play sleuth to establish what is going on. Not only that, she keeps the gang in line, including her brother Hector who messed up at the drop and has to be disciplined. She also takes under her wing five-year-old Lucy, whose mother is pimping her out to men for drugs, much as Lola’s own mother did. Above all she has to keep her real leadership of the gang a secret: she knows that her murder of the previous leader Carlos would become evident to Carlos’ sister Kim if her true status were to be exposed.

This is a very impressive debut novel, told in the present tense and conveying the reality of lives of lives in the ghetto: dull and hard, with all the worst aspects of human nature on display. Lola herself is a product of this deeply flawed culture, but her ability to think clearly under pressure sets her apart, able to make the tough decisions necessary to protect her family. This is a woman you wouldn’t want as an enemy, but you can’t help admiring her abilities and her determination to survive.