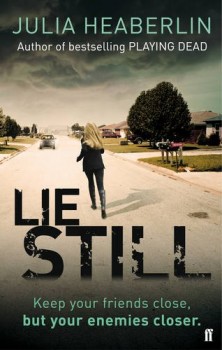 Emily and husband Mike have moved to Texas due to Mike’s new job as police chief.  Emily tries her best to forget her difficult past and to take part in the local social life, but things become very problematic when a woman goes missing.

Emily has a difficult past which she has kept secret, even from Mike, her husband. When they move to Texas for Mike to take up a new post as police chief she tries her best to integrate with her female neighbours. One woman in particular appears to hold sway over the others and Emily soon learns that she does this through holding secrets about each of them.

When this woman disappears Emily is forced to tell Mike of her own secret and when she begins to receive phone calls and messages from an unknown source she has to face the possibility that her past is catching up with her. Does the discovery of the missing woman’s body mean that this murder is connected in some way to Emily’s secret?

The society described in Lie Still is intensely irritating and superficial and it is hard to know whether or not this is a deliberate way of creating a sense of not belonging, or whether it reflects normal life for some. Emily certainly finds it hard to find any genuine friends, although she is drawn to a character called Misty, herself rather odd. Indeed, all the female characters are peculiar and appear to function in an imaginary dream-like manner. On the other hand, most of the men are given positive traits, which perhaps calls into question the beliefs which underpin the book.

The idea of someone becoming powerful through holding secret information about others is the basis of many blackmailing scenarios. However, truths are gradually uncovered about the main characters as the book progresses. Past and present events are intertwined, although they are not always related, the main significance of the past being the games that it plays with Emily’s mind. Overall, the plot is so complex that it is not the most memorable. There is possibly too much going on, and consequently, although the action reaches a climax in some of the final scenes, this lacks some of the punch that it otherwise might have achieved.

The writing flows easily with much of the text written from the point of view of the main character. Dialogue too is well constructed and believable. The book could certainly be a good read but may need to be read through without breaks as it is too easy to forget the detail.