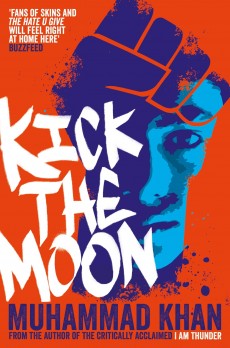 Ilyas Mian wants to draw comic book heroes rather than work in his dad’s shop but until he meets Kelly Mathews, Ilyas keeps his ambition to himself. Kelly understands him like no one else, but unfortunately, she’s attracted to Ilyas’ friend Imran, and doesn’t listen to the warnings she’s given about him.

Ilyas Mian is 15. He’s more interested in drawing than in the prospect of being the one to take over his father’s business in due course, but since his older brother went off to university in the States, that’s what Ilyas’ father is determined he is going to do, whether he likes it or not.

At school, Ilyas hangs around with local bad boy Imran, in his shadow along with his friends Daevon and Noah, skirting the fringes of London’s gang culture. To stay in with Imran, Ilyas has to use his artistic talents to spray-paint tags on fences and bridges. At home there’s the usual tension with his older sister Shaista, as well as with his father, and at times it seems like only his mother is on his side. But when Ilyas ends up in trouble at school for getting into a fight with Imran, even she finds it hard to take his part.

Ilyas is stuck in detention for a week, thrown together with Kelly Matthews, a girl from a very different background to his. To Ilyas’ surprise, the two hit it off and Kelly takes an interest in the comic book superhero character that Ilyas has been working on for years. Ilyas is a talented artist, and writing is what Kelly enjoys.

Together the pair decide to enter a competition being run to find a new talent in the world of comic book illustrators. There’s a big cash prize and the chance to work with industry professionals to develop the winning idea. The pair’s friendship is tested, though, when Kelly gets involved with Imran and her life comes crashing down in ruins when he exploits her.

The opening scenes of Kick the Moon look back at Ilyas as a nine-year-old proudly going to school in a Superman costume for a ‘dress as a book character’ day, but his hopes of winning the prize are knocked back by some unpleasant racism as a couple of his classmates point out cruelly that his skin is the wrong colour. It’s a painful scene, made more so by being experienced through the eyes of a young child who doesn’t understand why the colour of his skin rules him out of dressing up as one of his favourite characters. Adult intervention comes too late to prevent Ilyas’ humiliation at the hands of his classmates, but out of the wreckage of his hopes comes the aspiration to draw and write about a superhero of his own, one that shares his skin colour.

Muhammad Khan’s teenagers are blisteringly authentic with their street talk and casual nastiness to each other. There’s nothing comfortable about the picture he paints of school life, where bullying is rife, despite the teachers’ efforts to stamp it out. The attitude of the teenage boys to girls – and women in general – is deeply toxic, as is the attitude of the girls to anyone who isn’t in their own immediate friendship group. Social media is used to bully and shame others and there seems to be little anyone can do to prevent this, as Kelly learns to her cost when a video she wasn’t even aware had been taken goes viral at school.

There’s nothing comfortable about Khan’s portrayal of teenagers but seen through Ilyas’ eyes there’s plenty of hope, too. There are teachers he gets on well with, particularly Ms Mughal, whose faith in Ilyas’ work gives him the confidence he needs to go ahead with the competition, even if it involves a complete rewrite of his original protagonist.

Kick the Moon is a realistic portrayal of the pressures on today’s teens with a refreshingly diverse cast and an unusual angle. It was great to see Ilyas’ superhero brought vividly to life by comic-strip illustrator Amrit Birdi and to watch how his main character develops from his original ideas to their final form.

The book is a stunning follow-up to Khan’s excellent I Am Thunder and will cement his reputation as an author who can bring his characters vividly to life and talk intelligently about the pressures facing teens of all backgrounds. And if you’re outside the target age range for the book you might want a dictionary of urban slang close at hand – although most of it’s pretty obvious from the context – or alternatively just sit back and enjoy the ride.