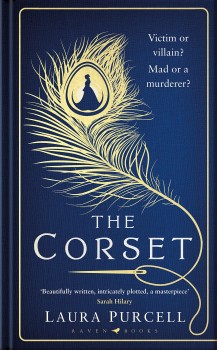 Prison visitor Dorothea Truelove hears a chilling story of brutality and the supernatural from a young seamstress accused of murder.

The Corset, with its layered, chilling, dark and creepy plot and its unsettlingly claustrophobic atmosphere, is a full-blown Victorian Gothic horror, with pertinent social comment and shocking revelations every few pages as it builds smoothly towards a well-disguised and horrifying ending. As much a story of class as a murder mystery, its protagonists are two young women from opposite ends of the Victorian social spectrum.

Dorothea Truelove is in her mid-20s. Wealthy, beautiful and of a decidedly independent mind, her biggest problem should be fending off a series of unsuitable men her widowed father wishes to marry her off to for his own ends. Ruth Butterham is a poor teenager, awaiting trial and certain execution for a murder to which she has already confessed.

Dorothea’s charitable work takes her into Oakgate prison, where she explores her near obsession with phrenology – the fashionable Victorian fad that the shape of a person’s skull can cast a light on their nature, including their propensity to commit the most serious of crimes. But when she meets Ruth, she is forced to face another explanation as the young seamstress attributes her crimes to a supernatural power in her stitches.

As Ruth gradually tells her horrific story of near-starvation, slavery and torture, bitterness and betrayal, Dorothea’s belief in rationality and the power of redemption, those staples of the better classes of Victoriana, is shaken to the core.

Prison visitor and prisoner. Society’s powerful and powerless. The contrast could not be starker and as this eerie take of death and dresses unfolds, Dorothea’s certainties are shaken to the core. Only two questions remain. Can Ruth’s story be believed, even trusted? Is she mad, or simply a murderer?

It would be overly-simplistic to say it’s a matter of deciding her guilt or innocence. The shocking, brutal story, filled with an underlying tension, addresses many issues just as relevant now as then – the place of women in society, poverty, social expectations and what love really means.

This thought-provoking, beautifully woven and blood-chilling story will keep the reader hooked with the twists and turns of back stories and events. With a genuine feel for its setting, it is a must for lovers of historical or gothic horror.
Purcell’s skill is to draw the reader in. We are as much in the dark as Dorothea, as every revelation and layer pushes and pulls one way or the other. Surely the idea you can hurt someone through the garment they wear is ridiculous ...? The author has the ability to get her reader inside the heads of her characters and see life from their point of view, coloured by different beliefs about health, disease, religion and the supernatural, without ever offering any kind of judgement.