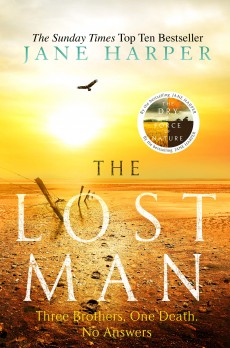 The death of Australian outback farmer Cameron Bright brings his estranged brother Nathan back to the family home, where there are plenty of unresolved conflicts.

Some 1500 kilometres west of Brisbane, a merciless summer sun means death to anyone unwise enough to stray far from their vehicle without plenty of water. Nathan and Bub Bright meet at Stockman’s Grave, where their brother Cameron sought shade from a solitary tombstone before he succumbed. But how he came to be separated from his car, found nine kilometres away, is a mystery.

The death brings Nathan back to the family farm, next to his own but several hours drive away. Nathan has lived alone for ten years since his wife Jacqui left in an acrimonious separation, taking their son Xander with her. Nathan’s isolation has been compounded by his ostracism by the thinly-spread local inhabitants following his failure to stop on the road for a man in trouble – Jacqui’s father.

Those at the farm are shaken by Cameron’s death, but beneath the surface there seem to be plenty of other problems. Nathan’s mother Liz and her three sons all bear the scars of their irascible father, killed in a road accident several years previously. Cameron’s wife Ilse and their two young girls seem subdued. A couple of backpackers have been working at the farm, but it is not clear what they contribute.

Local police resources are limited, and reports that Cameron has recently been unsettled incline the officer on the spot to regard his death as suicide. Nathan has his doubts, and a number of odd circumstances puzzle him. Cameron was always friendly with outsiders and popular, unlike solitary and silent Nathan who has acquired a reputation for being odd. However, it may be that Cameron’s death provides an opportunity to make a new start.

For those not fully appreciative of the climate of the Australian outback, Jane Harper paints a picture which is utterly convincing: relentless heat, sand and dust, a challenge to any form of life. Existence in such weather extremes always has a fascination, even as you wonder why anyone would ever consider living there.

But this is just background; the narrative is gripping too. The history of the family and Nathan’s relationship with his brother emerges only slowly as a lifetime of shared experience, disappointment and petty betrayal is revealed. Cameron’s image gradually hardens into something very different from his public persona, a man with serious problems. Nathan in contrast begins the book full of hurt and wary of contact, but as events play out the reaction of others shows that he is loved and feared. The Lost Man is an excellent addition to Harper’s previous outback books.