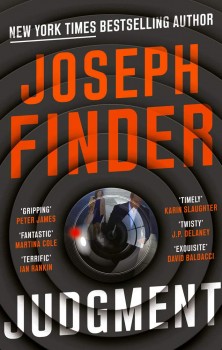 A rare departure from her normal correct behaviour renders Judge Juliana Brody vulnerable to blackmail. To defeat her adversary, she will need to be as ruthless as they are.

Judge Juliana Brody is a model of rectitude and sleeping with a stranger at a law convention is entirely out of character. That her lapse might have serious implications is brought home to her a week later when the man walks into her Boston court and is introduced as a lawyer for the defendant in a case currently before her.

Things get worse when she is shown video from the night in question and told that it will be released on the internet if she does not dismiss the plaintiff’s case. This is an action seeking damages for sex discrimination brought by a young woman against Wheelz, a new ride-hailing taxi company.

Brody is entirely unwilling to succumb to blackmail but faces the end of a promising career if she does not. Her husband is still unaware of her one-night stand, and an added complication is the pressure that the revelation of her behaviour will put on her marriage, and on her 16-year old son, who is already showing signs of acting up in ways likely to be prejudicial to a successful future.

A friend puts Brody in touch with a PI, who helps her with digging into the party behind what was clearly a set-up. She soon finds herself breaking the law herself as the only way she can get some leverage. Events soon show that her opponents are entirely ruthless, and that in persisting with her opposition she is putting herself and her family at great risk.

This is an excellent tale which stays with Brody throughout. The judge is unusually well-behaved for a hero, but the character is given a convincing backstory which underlies her resolve, and as the book progresses you come to admire her sheer determination to find a solution to the trap in which she has been caught.

A somewhat surprising aspect of this is the indifference of individuals highly situated in political circles and government agencies to the revelation that there is dirty Russian money involved in the plot against Brody. If there is any truth in what emerges from Brody’s attempts to find help, it appears that there is little appetite in Washington these days for confrontation with the Bear, notwithstanding the fact that Russian penetration of the US now exceeds that seen during the Cold War.

This is, of course, a work of fiction but feels authentic from start to finish: the courtroom scenes, police involvement, Brody’s son and his problems at school, all come across as entirely credible and current. The story grips in the first few pages and events move fast throughout, with plenty of twists and turns. It’s a worthy addition to Finder’s long list of thrillers.